Media Type
Text
Description
This item is a letter dated January 13th, 1851 addressed to Thomas B Campbell from W. H. Fisher in Saint John, New Brunswick.
Date of Publication
1851
Subject(s)
Correspondence
Documents
Local identifier
2002.003.001
Collection
Marjorie Schofield Collection
Language of Item
English
Geographic Coverage
Copyright Statement
Copyright status unknown. Responsibility for determining the copyright status and any use rests exclusively with the user.
Recommended Citation
Letter Written to Thomas B Campbell from W.H. Fisher, 1851. Burford Township Historical Society, Item No. 2002.003.001.
Terms of Use
The information and images provided are for personal research only and are not to be used for commercial purposes. Use of this information should include the credit "Burford Township Historical Society and Museum."
Contact
Burford Township Historical Society
Email
WWW address
http://www.burfordtownshipmuseum.ca/
Agency street/mail address

I Received both your letters together

one dated 10 December + the power of attorney, the same day

I Received one from Mr McLean dated [30] December

be to town within a weeks time. [Well] he came to town

last week but the money he expected he couldn't get

he was very sorry, but so it was, he couldn't make the first

payment. he wanted the place very much, but told me if

and he [is] certainly expected the money but was disappointed

Bargain. this is the best thing I could do, and the best [I] think

will be settled some way. I am very sorry that I cannot send you

a [draft] on the [Back?] with this letter but so it is and it must be borne

patiently although I think your patience has had a long trial

for Zeke. the folks here are all pretty well. [Grandma] has had one

probability at present. the Fenwick girls that is Catherine & Anne

Anna [Brundey] with her little family of children are pretty well

[illegible] at present however he gets along pretty well. [Illegible] here has

been very dull these last 3 or 4 yrs but is now reviving. you [Illegible]

the [outdoor] I send in the newspaper. I see no [Illegible]

[Illegible] every summer without soemthing important

such high postage [Illegible] every time without getting value in

some way for it. Wishing you a happy new year & my

best respects to your fair Lady if you have been fortunate

the folks all wish to be

M H Fisher has shown me the above letter it is

as he stated only [Mr] McLean [Illegible] to wait 'till

July & [then] thought it better to get the place sold

and settled and have at least the Interest going

on if nothing else I think it more than

probable that it will be as he has stated above

only Mr McLean may wish to wait till July before 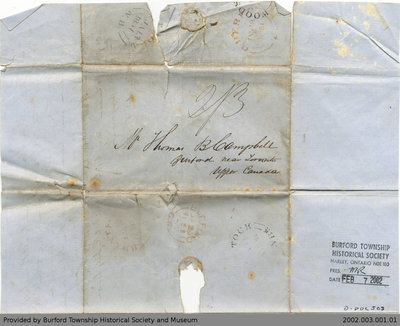