Media Type
Text
Description
This item is a letter written on May 28th, 1860 from Joseph Fennick to his cousin regarding the death of Joseph's mother. The last page was writing both horizontally and diagonally.
Date of Publication
1860
Subject(s)
Correspondence
Documents
Local identifier
1998.001.001
Collection
Don Newstead Collection
Language of Item
English
Geographic Coverage
Copyright Statement
Copyright status unknown. Responsibility for determining the copyright status and any use rests exclusively with the user.
Recommended Citation
Letter From Joseph Fennick to His Cousin, 1860. Burford Township Historical Society, Item No. 1998.001.001.
Terms of Use
The information and images provided are for personal research only and are not to be used for commercial purposes. Use of this information should include the credit "Burford Township Historical Society and Museum."
Contact
Burford Township Historical Society
Email
WWW address
http://www.burfordtownshipmuseum.ca/
Agency street/mail address

think that I have forgotten to answer

your kind letter which came to [home]

about three weeks scince but it is not

the case, I should have written before

but was expecting a situation and

thought I would [Illegible] when I got

situated but things have changed -

it becomes my painful duty to inform

you of the death of my Dear Mother

She departed this life on the 14th [Illegible]

her death was quite unexpected

although she was in very poor health

we little thought that the changes

(which we have all to undergo) was so

near. She had been ailing [reather] more

[than is] common for two or three days -

before near death. And the night on

which she died I was in her

bedroom talking to her and asking

what I should tell the [doctor] who I was

going to consult the next day [she]

answered me quite distinctly and

did not seem by any outward appearance,

to be worse than she had for several

days this was about. 8 P.M. about half

past 8 she was [taken out to] a violent

pain in the bowels which caused a

applied every thing which [cold] be of

any use no such case without effect

came and they applied hot cloths to the bowels

without effect about 11 O clock she

fainted away fater she came to she was

not concious of having done so although

she retained her faculties - in a few

minutes after that she fainted away

again she kept getting worse untill

about half past 12 on Thursday night.

The spirit fled to the one who gave

it. I can hardly realize that she is

gone. I cannot describe my feelings

although we have this consolation that

"we do not [mourn] as those without hope"

we know that she uis [severed] from a

life of pain and sorrow to one of [perpetual]

joy and gladness, it is another [time]

to [bind] us to those who have gone before

the [word] of her death was sent to all the

friends but [they] were not all able to

get to see her before she was buried

Father was going to have her [removell]

to the city for interment but was

she lies in the burying ground by the

from the [Portland] [Illegible] was up

on the occasion, the funeral took place

[Illegible] the words which are contained

was the only ones of her [Illegible] could

get here. Your sister Annie was

up and [Illegible] two or three days

all of her children was at home

she died about writing to you [Illegible]

the pleasure of seeing you [Illegible]

again for me to give [Illegible] her love

to you and your family. Uncle

Thomas is better at [Illegible]

has been for a good [10 mile] although

said for him not to be left alone on

any considerations - the family are

acts as bad as the devil will let him

I made inquiries about those [Books]

[Cousin Annie] has the Geography

and the large [Illegible] the Pleasures of

[hope] is at our house I cannot get

any information about the companion

to the bible - Aunt Whiteside [said] that it

is not at her house. I sympathize

with Samuel Henderson if I had any

money I should lend it to him - I will

advise you to write to [M Whiteside] about what

it is no more than right

I hope the time is not far distant when

I can [recompense] you for [your kindness?]

although if I was in [Illegible]

write soon as possible and I shall

write you a longer letter and give

you all the information that you

Give my regards to [Illegible] and 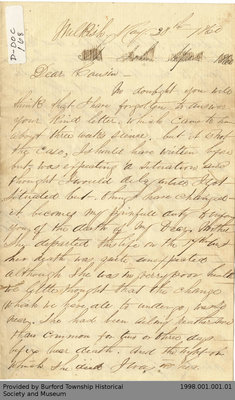