Media Type
Image
Text
Description
This item is an historical account of the early history of Hatchley written by Deborah Haight. Topics discussed include early settlers, the railroad, and Hatchley school.
Inscriptions
Page 1

The question when and by whom Hatchley was
named carries our minds back to the days when this
part of the earth's surface was covered with forest.
A few families after a long journey on ocean
and lake boates at last finaly land at some lake
port in the Western part of Upper Canada. We may
imagine them proceeding then on the difficult journey
with teams or oxen over hundreds of miles of new roads
cut through virgin forest. Finaly they arrive on
their new land, and then begins the laborous task
of [heisting] a home out of the trees standing all about
It would be interesting to know whom we have to
thank for doing the first and most difficult part of
making each farm around Hatchley a tillable piece
of land. In a number of cases we do have a
record. It was in 1845 that Jarvis Yates brought
his mother and family of 5 sons & 1 daughter from England
and settled on lot 19 between Concession 11 & 12 of 180
acres bought from an old pensioner named Baldwin. he had
a few acres cleared and a log house in centre of farm,
at this time about thirty five people were living in the
vacinity. The Yates family had come from Hanley in
England but Jarvis' birthplace was Hatchley, a farm
home where he had traced his ancestors back to 400 yrs
He had a board painted with "Hatchley Place" and
placed it on the northern entrance to his farm,
hence Hatchley got its name.

The railroad had a good deal of influence on the
prosperity and growth of Hatchley; It was begun
in 1874, the first train passed through in 1876.
One would think it might have been an occasion of
special celebration, it was for a number of boys who
went over at noon hr to see the train and consequently
were late for school, Well do they remember their schoolmaster
Mr Kenney, for the fact seems to imply he was not interested
in trains.

Hence forward the railway crossing and the station
was the centre of Hatchley. At one time there was a
large number of houses built around them.
The Hatchley Place sign on the Jarvis Yates farm was
moved to the station

Those were the prosperous days, when G.T.R. later CNR
was the live centre. With it came opportunity for
young people to attend high schools in Brantford,
shipping carloads of lumber, logs wood, livestock,
turnips, apples, milk, and other farm products and
feed by carload coming in.

It was the building of the railway that brought
Mr Powell (contractor) to Hatchley. He was in
charge of grading of the mile of road that passed
through Hatchley - and three years later in 1879
married a Hatchley girl Adelaide Robinson, built a
store (erected by Dan Burtch of Norwich). The post office
was in this store which combined a residence.
Mail received morning & evening with [Toronto] Dailys
comming on noon train, 4 passenger trains daily plus
a freight train. 8 & 11 am and 5-6 evening

A.M. Rush at one time operated an apple drying factory
employing boys and girls to do the pealing by hand.
In 1895 the [frame] school did not seem much separated
from Hatchley as all church services & meetings were
held there. Later a Buck structure was build west
of the frame building. It was finished in 1883
and used as a community Hall as well as a School.
Sleigh loads of young people from west of Norwich
gathered loads of young people and came to the literarys

It was a community very much alive. In 1893
everyone turned out to lend a helping hand to
build a church. Later - as no minister could be
secured the building was sold and used to [build]
2 houses in Norwich - by morgagee.
Hatchley had its turn [delegating] - Reeves and
councilers to Burford Township Council.

Hatchley had its turn of reverses, 1st in Railway
services and second serious fires, and also in
the later years, many fires - so many by lightening.

Hatchley had its turn of reverses 1st in the
decline of the Railway Services & mail
and serious fires. The John Yates Ware house
threaghtened to destroy the entire group of
buildings, and Ben Bowells fur warehouse and barn
store & dwelling. Many other buildings of the district
have been lost by fire caused by various reasons
- among them Wm Arthur Yates house, Chas Yaters house
& barn, Wright buildings, Sweazy & Scott buildings
This was not all some 26 fires visited the
district which greatly changed the landscape
of Hatchley - Some homes were replaced, but
to the old timers never looked the same
and by 1966, many changes have taken
place. The farmer pioneers are no longer
in the district and not a Yates lives there any
more not to mentioned any of the 35 settlers of 1845
to 1860 either.
Subject(s)
Correspondence
Documents
Local identifier
1997.077.009
Collection
Jean Sumsion Collection
Geographic Coverage
Copyright Statement
Copyright status unknown. Responsibility for determining the copyright status and any use rests exclusively with the user.
Recommended Citation
Historical Account of the Early History of Hatchley. Burford Township Historical Society and Museum, Item No. 1997.077.009.
Terms of Use
The information and images provided are for personal research only and are not to be used for commercial purposes. Use of this information should include the credit "Burford Township Historical Society and Museum."
Contact
Burford Township Historical Society
Email
WWW address
http://www.burfordtownshipmuseum.ca/
Agency street/mail address 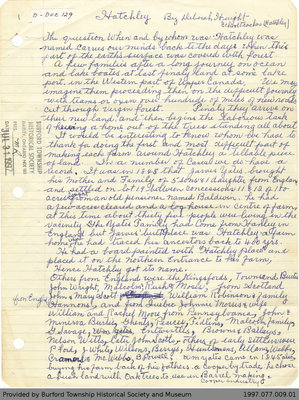