Media Type
Text
Description
This land deed dated September 01, 1919 between Irwin Pepper and Albert E. Weaver, transferred a plot of land in Burford Township (Lot 7, Concession 7) from Irwin to Albert for the sum of $3500.
Date of Publication
1919
Subject(s)
Documents
Deed of Land
Local identifier
2005.015.001
Collection
Joan Timmins Collection
Language of Item
English
Geographic Coverage
Copyright Statement
Copyright status unknown. Responsibility for determining the copyright status and any use rests exclusively with the user.
Recommended Citation
Land Agreement Between Irwin Pepper and Albert E. Weaver, 1919. Burford Township Historical Society, Item Number 2005.015.001.
Terms of Use
The information and images provided are for personal research only and are not to be used for commercial purposes. Use of this information should include the credit "Burford Township Historical Society and Museum."
Contact
Burford Township Historical Society
Email
WWW address
http://www.burfordtownshipmuseum.ca/
Agency street/mail address

THIS AGREEMENT MADE IN DUPLICATE THIS

IRWIN PEPPER of the Township of Burford

hereinafter called the Vendor of the FIRST PART.

of the city of Hamilton, hereinafter called the

PURCHASER OF THE SECOND PART.

WHEREAS the Vendor agrees to sell and the Purchaser agrees to

purchase that farm on which the VEndor now resides being part

of Lot 7 concession 7 of the Township of Burford, consisting

payable in the following manner;-

The sum of $20, on the signing of this agreement

The Vendor agrees to sow Two acres of Rye, and Flow

Four Acres, And hoe the Straw berries, and cover them with Stra-

and leave all straw on the farm.

The Vendor agrees to Furnish a Clear Deed, and to give

All Writings to be done the first week in March.

In witness whereof the said parties have 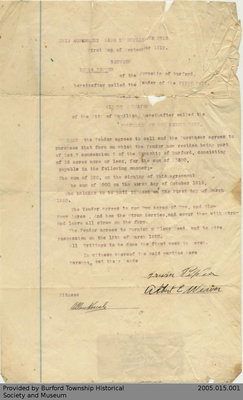