Media Type
Image
Text
Item Type
Photographs
Description
This item is a black and white photograph of Stanley Balkwill and his aunt (Miss A. Balkwill) and uncle (Edwin Balkwill) at Buckingham Palace on March 28, 1944. Balkwill is wearing a Royal Canadian Air Force greatcoat and a Junior Officer’s peak cap; his aunt and uncle are in civilian clothing. There are military and civilian personnel in the background. Stanley was at Buckingham Palace, London, England to receive a Distinguished Flying Medal for leading a RCAF squadron an attack on enemy shipping near Malta on February 21, 1943.

See the External Links for references.
Inscriptions
Stanley Balkwill born in
17 King [W] Burford at Buckingham
Palace to receive D.F.M in WWII
He was killed at Debert in 1945
People with him are aunt + uncle
I was o/c South Maitland
across Bay at time of Stanley's
death + stood by his coffin at
Turo R.R Stn. without knowing it
Date of Publication
28 Mar 1944
Subject(s)
People
Photographs
Second World War
Personal Name(s)
Balkwill, Stanley Herbert
Local identifier
2002.061.052
Collection
Mel Robertson Collection
Language of Item
English
Geographic Coverage
Copyright Statement
Copyright status unknown. Responsibility for determining the copyright status and any use rests exclusively with the user.
Recommended Citation
Military Photo of Stanley Balkwill. Burford Township Historical Society and Museum, Photograph No. 2002.061.052.
Terms of Use
The information and images provided are for personal research only and are not to be used for commercial purposes. Use of this information should include the credit "Burford Township Historical Society and Museum."
Contact
Burford Township Historical Society
Email
WWW address
http://www.burfordtownshipmuseum.ca/
Agency street/mail address 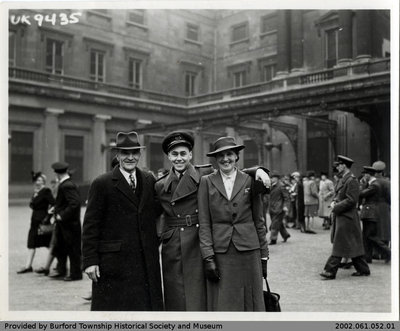 View Back of Photograph
Groups of Related Records