The land on which the Levi Boughton house can be found was purchased in 1844 from Thomas Coleman and his wife. Boughton was the primary builder of the famous cobblestone houses located in and around Paris. He came to Paris from Albany, New York, and lived in the town for the rest of his days. The house was put up for rent in 1885, a year after Levi’s wife passed away, however it is unclear when exactly he moved out of the house.

On January 16, Levi Boughton and his wife took out a mortgage for $300 from Henry Hart and John J. Mason, trustees for Mary Stokes, against lots 1, 2 and 3.1 This was likely done to finance other building projects that Levi Boughton was working on at the time.2

On February 3, Levi Boughton and his wife were released from the aforementioned mortgage by Henry Hart et all. 1

Lydia Boughton passed away in the spring of 1884. With his wife having passed and his children grown, Levi arranged for most of the possessions in the house to be auctioned off and moved out.2

On June 27, an advertisement in the Brant Review indicated that the house had three rooms 17 feet square and five bedrooms. The ad also stated that a tenant could move in at the beginning of May. 1

On February 3, Levi Boughton was released from the aforementioned mortgage by J. Thomas Ryall. 1

On January 8, Levi Boughton took out a mortgage for $500 from Andrew Crosbie against lots 1, and 2.1

On March 30, Levi Boughton was released from the aforementioned mortgage by Andrew Crosbie.1

On October 2, Andrew Crosbie purchased lots 1, 2, and 3 for $1000.1 Andrew Crosbie was Levi Boughton's son-in-law, and at this point Levi was 89 years old and likely feeling his age.2

On June 10, an article in the Paris Star states that a Mr. Charles E. Walker bought the cobblestone house, however official records give no indication of this. It is likely that he lived there without owing it.1

On September 18, John Carnie and his wife sold the east 61 feet of Lot 1 to David Jonathan Wilkes for $2750. This was financed partially out of their own funds as well as a $2000 mortgage from Robert Easton.1

On October 1, Janet Weir, wife of Robert N. Weir, purchased the remaining home and grounds for $3100.00, subject to mortgage.1

1924 – Oscar and May Dickert Purchase House

1932 – Mortgage Transferred to the Estate of Robert Easton

1935 – Demand for Mortgage from the Estate of Robert Easton

On June 8 there was a demand for mortgage from Elizabeth A. Easton and Wiliam Easton, executors for the estate of Robert Easton to John O. Dickert and Ava M. Dickert.1

Upon his death, his estate passes to his wife. 1

On August 12, Melvin Dickert and Evelyn Hunt, the executors of the estate of Ava May Dickert sell the house and grounds to Ingvart & Olga Jensen.1

On February 17, ownership of the house was transferred from Ingvar and Olva Jensen to Olga Jensen for $1.1

On September 30, Thomas and Lois Jensen purchased the house.1

Levi Boughton was a mason in Paris, originally of Normandale, New York State, where he was born on the 26th of May, 1805. He was a son of Irie and Anna Boughton of Connecticut, where they were also married. From that State they emigrated to Albany County, New York, when they were young and spent the remainder of their days there. Levi was married on the 2nd of September 1827 to Lydia Mann, born near Saratoga Springs 3rd December 1810. She was a daughter of George and Acenia Mann, of New York. Mr. and Mrs. Boughton were members of the Baptist Church, and had born to them sixteen children. They came to Canada and settled in Brantford in 1835 and in 1838 they moved to Paris and remained there for the rest of their days, Mr. Boughton carrying on his trade as mason all along. He was honored with the office of Church Deacon and Trustee and had a liberal common school training. Levi found the rugged path of life one that, through industry and integrity, proved itself a road to success. He had a comfortable home, in which he lived for over thirty years.3

The house is an excellent example of pre-1850 cottage architecture with its balanced dimensions, low pitched roof, alternating quoins and wide doorway with side and overhead lights. The interior has changed little save for the addition of a furnace and hardwood flooring, which cover the original wide plank floors. Of particular interest is the plaster medallion in the hall ceiling. Judging from the more modern type of ceiling and floor boards used in the construction of the porch, we can be fairly certain that it was added later - likely after Mr. Boughton bought the house. 1 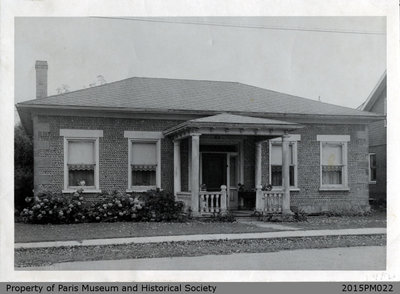