Media Type
Text
Description
In the early communities of the 1830s and 40s the roads and bridges that linked out of the way places like Paris to the larger towns like Hamilton and London were vital to settlers. New immigrants to the area needed ways to bring in the necessities of life and established farmers needed roads and bridges to take their produce to the larger local markets.

On a highway like the governor's road, that wound slowly through the heart of Upper Canada, there were broader reasons to maintain adequate communication with developing areas. In the event of war good roads were an essential part of military strategy. The loss of a bridge on a principal road like Dundas Street could compromise vital troop movements.

The early bridges were made of wood and during the spring thaws were subject to the danger of being swept away by the swollen river and large chunks of ice. This was the case when in the spring of 1833 the Paris Dundas street bridge was swept away by the spring freshets. It had been built from donations collected from the local inhabitants and they were unable to again raise the money needed to rebuild.

The first notice of an intention to replace the bridge was found in the Upper Canada Gazette, October 3, 1833 which read as follows: "Notice is hereby given, that application will be made, at the next Session of the Legislature for money to build a bridge over the Grand River on Dundas Street, in the Gore District, Paris 27th April, 1833."

Manuel Overfield and others followed up this notice with a formal request to the Commons House of Assembly for a loan. It was envisioned that the next bridge would be a more permanent structure of the type with stone columns and abutments. To build on such a grand scale would require a loan which would be repaid by means of a small toll to be collected from those using it.

The chairman of the committee reviewing the petition was the Hon. Charles Duncombe, Member for the county of Oxford, who in a few years would cause such a commotion during the Mackenzie rebellion. His committee in January 1834 recommended 1,500 pounds be loaned by the government for the purpose of erecting a more permanent bridge and 2,000 pounds was eventually lent. The bridge was to be built by Mr. John Hammill who had built the Brantford covered bridge in 1833. Hiram Capron's account books show him paying Hammill $169.11 from an account called the Bridge Account on November 9th, 1835. It was to be 230 ft. long and of a new improved plan called the diamond bridge. There were two arches and it was 24 feet wide.

From a letter written by John Smith, Paris' 1st Postmaster and village councilor, to Civil Secretary John Joseph we know that by January 1836 the structure was not quite completed. Both tracks and approaches were finished and the bridge was expected to be complete in early spring. A contract with Charles Gurney, one of Paris' early merchants and schoolteachers, had been made to operate the Toll Bridge for the first six months for the sum of 57 pounds. Any money earned over that amount would be Gurney's profit. The Provincial Legislature authorized the collection of Tolls at the Paris Bridge through the Act 4 Will. IV, Ch. 44.

But many of the people of the area were unwilling to pay the toll and when the river was low would cut across the flats by various routes and ford the river at about where the present William street bridge is.

In 1838 around the end of February Isaac Arnold had contracted to run the Toll Bridge for one year for 100 pounds. Arnold was well placed to operate the bridge. He had bought property in 1836 from Robert Roseburgh in the triangle of land opposite the bridge on Arnold Street. Arnold had been a gunsmith in England and was listed as a general blacksmith in the 1860s. He was the father of Charles and John Arnold who are remembered as horticulturists and long time Paris municipal counselors.

Isaac operated the Toll Bridge during the troublesome times of the Mackenzie rebellion and by February 1839 he was experiencing a problem about which he wrote in a letter to the 73rd regiment's Col. Frederick Love who commanded the area. He said that troops were passing over the bridge so frequently without paying that he was in financial trouble. In his own words, "His Majesty's forces having to pass over it so frequently as they do and for which I cannot collect any toll - In addition to this the express riders, Dragoons and teams in the service of the army are daily passing over frequently in numbers- so that I am deprived of the means to realize sufficient from the tolls..." It would appear that Arnold did not give up trying to make the operation of the Toll Bridge a success as the 1841 bridge report noted the balance of his contract due in August 1840 was not paid until November 1841.

The subsequent Tollkeeper, Mr. Robert Kirkwood, was also late paying the balance of his contract due in March 1841. He was eventually able to pay in November 1841. The Tollkeeper after Kirkwood, Mr. Darby Quigley, was able to make his first quarter payment but fell behind and had to wait until December to make his September payment. In 1843 the Bridge Committee was still trying to collect money owed by Mr. Quigley through legal means. From a careful check of the accounting report it does not look like the Tollkeeping business was a money making venture at that time.

By 1841 the bridge was in a dilapidated condition and 21 pounds was spent for new planking on the east side approach. The report also noted that the local Justice of the Peace William Granville Curtis had fined a user $2.00 for going over the bridge at "faster than a walk." There were also several other expenses noted such as 1 pound to Levi Boughton, the local builder of Paris' beautiful cobblestone houses, for repairing stonework on a bridge pier. In 1842/43 the government spent a further 313 pounds on improvements to the bridge.

The author of the 1843 report noted that the Tollkeeper or his employee would have to be more diligent in watching the bridge as he had crossed with a wagon and had met two others who had crossed without being asked to pay tolls.

Tolls for the Paris Bridge in 1844

The 1843 report also mentions that Duncombe had kept about 175 pounds of the Bridge Commissions assets when he made his escape in 1837.

Local history says that in March 1852 a great flood carried the bridge away isolating the village. To replace it, an engineer who was building the Great Western Railway bridge, was contracted to replace it and completed the new bridge within 30 days. Yet from government sources a contradictory report said that the bridge was burned down in 1847. After this report no further mention of the bridge is found in government reports. Clearly further research is needed to reconcile the two accounts.

A picture of Paris' early Toll Bridge has been found for the year 1842 which was a quaint addition to, "The Prettiest town in Canada."

Notes
Contributed by Roger Sharpe. This article originally appeared on the County of Brant wiki at ourbrant.wikia.com. It has been included in this collection for ease of research.
Date of Publication
10 Dec 2013
Geographic Coverage
Copyright Statement
Protected by copyright: Uses other than research or private study require the permission of the rightsholder(s). Responsibility for obtaining permissions and for any use rests exclusively with the user.
Contact
County of Brant Public Library
Email
WWW address
http://www.brantlibrary.ca/
Agency street/mail address
County of Brant Public Library (Paris Branch)
12 William Street
Paris, ON
N3L 1K7 | @brantlibrary 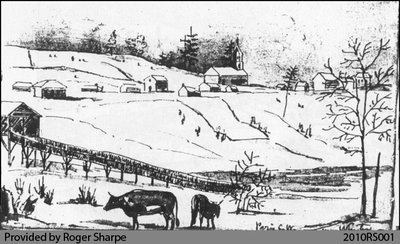