The church was started in 1837 and took two years to build due to a shortage of funds. In 1839 the church was built for $3000. It was a frame structure with a tin-covered spire and Gothic architecture. The church had an adjacent burying ground on Maple Ave in Burford, south of the stoplight. Samuel and William Gammage were mason and carpenter on the building project. The church held 250 and was open to all denominations for worship. It was also the first church in Burford Township. The Burford Methodists worshiped here until 1854 when they moved services to a hall. Their church was built in 1858.

The music in the church was supplied by a melodian owned by Peter McIntosh. Peter came to Burford in 1841 at the age of eight from Edinburgh, Scotland, son of Peter and Margaret Nesbitt McIntosh. He clerked at the general store and was a bookkeeper. Peter carried the melodian from his home to church on his back. It measured 73 cm high, 77 cm long and 43 cm wide. Its range was 4 octaves. Peter lived in Burford for about 22 years. After his marriage to Harriet M. Carter of Bishopsgate, they moved to Bookton where Peter had a general store.

Marriages are listed for Rev. Nall from 1835 to 1850 although he left the Burford church in 1843. In A Brief History of the Church in the Mount Pleasant Area, Ontario, Canada, before 1850 by Craig James Ostler and William Goddard, the occasion of Rev. Nall denouncing the Book of Mormon as a forgery is described. Rev. Nall denounced the book point by point for four and a half hours. At this point, one Mormon preacher stood to defend the book. After two more hours of hammering his points to the crowd gathered, they voted to accept his condemnation of the book. There were four exceptions of which three were from Mormon preachers and one from a layman. Rev. Nall’s book of 1873, Practical Atheism in Denying the Agency of Providence, is still in publication today.

Rev. Nall was followed by the Rev. W. F. Clarke, who took over in 1844, and continued at the church until 1846. Then Rev. W. H. Allworth was the minister for nine months as temporary supply over the winter. He also served as minister in Paris for 17 years. The next pastor was the Rev. James Vincent, who served for 8 years.

In 1854, the first Sunday School, the Claremont Union School, was formed. It consisted of one class for all ages. Samuel Gammage was the superintendent and Josiah Long the teacher.

Upon Rev. Vincent’s departure for the United States, the Rev. William Hay started at the church in August 1856. He was also minister at the Scotland Congregational Church. Several revivals were enjoyed by the Burford church, one in 1857, in which sixty souls were added to the membership.

The Rev. William Hay resigned in 1868 and was succeeded by the Rev. John Brown. In 1869, Samuel Gammage, Lawrence Daniels (Magistrate), Aaron McWilliams, Henry Cox, John Keachie and David Manne were deacons. (All are buried in the congregational cemetery except Henry Cox. He was a merchant, postmaster, clerk of the Division Court, and Justice of the Peace in Burford).

In 1883, prayer meeting was held every Thursday. The average attendance at the church was 125 and yearly givings were $708.

The church did well until the 1925 union which formed the United Church in Canada. It ran for a year as Pioneer United but in 1926 it closed. The bell and pulpit furniture were given to the United Church on King Street. Burford Congregational Church/Pioneer United was torn down in the early 1930s.
Notes
Contributed by Janet Hilliker. This article originally appeared on the County of Brant wiki at ourbrant.wikia.com. It has been included in this collection for ease of research.
Date of Publication
1837
Subject(s)
Buildings
Churches
Burford, Ontario (Historic Township)
Local identifier
2010JH006
Collection
Janet Hilliker Collection
Geographic Coverage
Copyright Statement
Copyright status unknown. Responsibility for determining the copyright status and any use rests exclusively with the user.
Contact
County of Brant Public Library
Email
WWW address
http://www.brantlibrary.ca/
Agency street/mail address
County of Brant Public Library (Paris Branch)
12 William Street
Paris, ON
N3L 1K7 | @brantlibrary 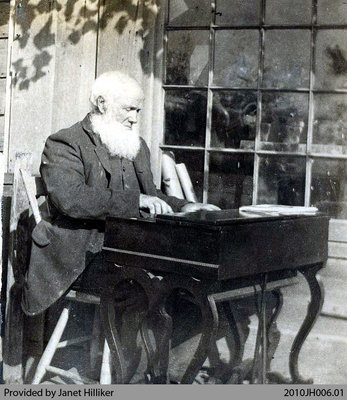 Bellows in the back

Keys and back with bellows

End view of stand with pedals

Stand with pedals, one for bellows
Groups of Related Records