The Word Among the Early Six Nations

The Word, or scripture, has always been a cornerstone of sincere Christian believers and it was no exception among the early Six Nations Indians. Aboriginal Chiefs, leaders in the Indian Department and Government officials all wanted to teach the Christian values contained in the scriptures to the Iroquois Nation and in the process introduce them to eternal salvation. In 1715, when the Six Nations were still living in New York, the first edition of the Anglican Prayer Book was published entirely in the Mohawk language, except for the title and prayer headings. This first edition was translated by Lawrence Claesse, the Interpreter of Reverend William Andrews a minister for the Society for the Propagation of the Gospel in Foreign Parts (SPG). The work was overseen by Rev. Andrews and revised by Daniel Claus, Deputy Superintendent of Indian Affairs. This translation contained the Morning and Evening Prayer Service, the Litany and the Catechisms. To this were added select passages from the Old and New Testaments and some family prayers. The SPG was originally called the New England Company. It was organized in 1649 to minister to the spiritual needs of the aboriginal communities in North America. At different times in its history, it was known under variations of the two names. The SPG was closely associated with the translations of the prayer books, as many were financed and the translators employed by the society. After the Revolutionary War, its attention shifted from the United States, to Canada.

The second edition of the Mohawk Prayer Book was published in 1769. It contained the Order for Morning and Evening Prayer, Communion Office, Baptism, Marriage and Burial Services with more passages of Scripture, Prayers and Psalms added. Reverends William Andrews and Henry Barclay, who had served for many years among the Six Nations in New York, translated this edition. Rev. John Ogilvie, who succeeded Barclay in his ministry, reviewed their work. It was said that errors existed in the translation but this is understandable, as Rev. Ogilvie was not fluent in the language. He was able to read the church service in Mohawk, but when he preached he used an interpreter.

-1780, 3rd edition, The order for morning and evening prayer, and administration of the sacraments, and some other offices of the Church of England [microform] : together with a collection of prayers, and some sentences of the Holy Scriptures, necessary for knowledge and Practice = Ne yakawea Niyadewighniserage Yondereanayendakhkwa Orhoenkéne, neoni Yogarask-ha Oghseragwégouh.

- 1842, The Book of Common Prayer, according to the use of the Church of England. 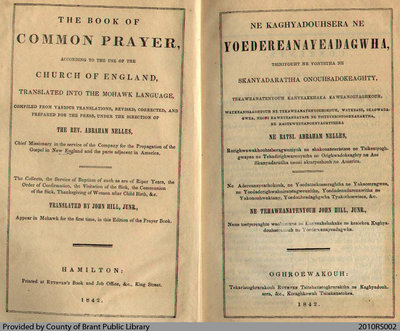