The building was also a general store operated by W. O. Soules who served as the first postmaster in 1851-1854. He was succeeded by John C. Swift in 1854, then by William J. Buckwell in 1855. Buckwell continued to be postmaster until his death in 1877. Buckwell's widow then replaced her late husband. She served as postmaster until 1891. Her daughter succeeded her, and the post office was moved to a small house next door.

The original photograph was provided by Joyce Smith during a Scan & Share Day event held at the Onondaga Hall on January 14, 2012.
Date of Original
[before 1943]
Dimensions
Width: 7.3 cm
Height: 7.1 cm

Subject(s)
Buildings
Post offices
Local identifier
2012OC218
Language of Item
English
Geographic Coverage
Donor
Courtesy of the Brant Historical Society.
Copyright Statement
Copyright status unknown. Responsibility for determining the copyright status and any use rests exclusively with the user.
Recommended Citation
Post Office of Onondaga, before 1943. Brant Historical Society.
Terms of Use
The information and images provided are for personal research only and are not to be used for commercial purposes. Use of this information should include the credit "The County of Brant Public Library".
Contact
County of Brant Public Library
Email
WWW address
http://www.brantlibrary.ca/
Agency street/mail address
County of Brant Public Library (Paris Branch)
12 William Street
Paris, ON
N3L 1K7 | @brantlibrary 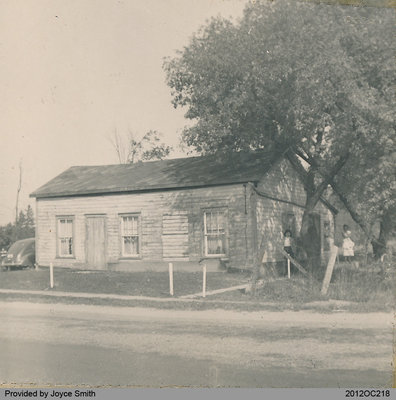