Creator
Robertson, Mel, Author
Media Type
Text
Item Type
Articles
Description
From the 1970s through the 1980s, Mel Robertson wrote many articles for the Burford Advance and Burford Times on the history of Burford Township. This clipping contains the article Burford Activities in World War I. The article may not have been republished.

BURFORD ACTIVITIES IN WORLD WAR I

Wiile it is not possible :o record all the war-centred activities that took place in Burford during the 1914-18 War it may be possible to create a feeling for the times by listing some of the events reported in the Advance of the time.

When World War I began in August, 1914 Burford people expected that since the local dragoon squadron was listed as one of the three best cavalry units in Canada that it would be called up en masse in the first few weeks of the war. However, the old generals who were in command of the Canadian militia felt that mounted infantry, such as the dragoons, would be of little use and consequently the Burford militia was not called up as a unit. The Armoury, however, became the centre of local recruiting. The building was considered to be of some military importance and to prevent an attack on it Joe Hunter, a local civilian, was hired to act as a night guard. Joe. who was a crack shot, used to parade around the building at night much to the dismay of the German Empire which undoubtedly regarded the Burford Armoury as a prime target for sabotage. Why members of the local militia unit did not do this work I cannot say. The Armoury became the centre for Red Cross work and dances and recently when the present occupant of the building was cleaning out the attic she found a large number of tickets to a Red Cross Ball on Wednesday. Feb. 25, 1915. These listed admission for ladies at 25 cents and gentlemen at 75 cents. Similar balls were held regularly.

Large numbers of Burford area men enlisted in the army during the war and a considerable number were killed in action.

Their names are recorded in various memorials throughout the village.

Burford people were quick to support war associated activities as the early 1915 issues of The Advance can attest. One of the first was recorded on April 1. 1915 when the Girl's Guild of Holy Trinity Anglican church began to make a quilt. This was to consist of 20 squares and 20 girls were to raise S5 on each patch by getting friends to pay for having their name embroidered on the patch. It was expected that 2,000 names would be put on the quilt On completion the quilt was to be displayed in a local store and then auctioned off. All of this would have raised considerable money and one has to wonder what became of this quilt? During the same week the Ladies Aid of the Congregational church voted money to the Red Cross and the Women's Institute began Red Cross work at the Armoury preparing sheets for the university Hospital in Toronto.

Foreign employees of local farmers began to receive call-up notices from their home countries and on April 6 Liven De Snider a Belgian man employed by Joe Brethour left for The Front accom-panied by Canadians Frank Lee, Ed Godden and Sam Ritchley. A bale consisting of 20 grey shirts, 30 pairs of hand-knitted socks, one scarf, some hospital gowns and pajamas and a cheque for $15 was sent to the Toronto Hospital.

On April 6 "The Advance" printed a letter from George Tapley a Burford man who was in France. This letter (George wrote) had been written on a tin box in a Frenchman's hay mow. It was dated Feb. 27. George reported that the Germans were being driven back mile by mile and that the English guns were roaring constantly blowing the enemy out of his trenches. George was very optimistic that the war would soon be over and asked for some McDonald's tobacco as the local tobacco wasn't worth the powder to blow it up . Little did George, realize at the time of writing that the war would go on until 1918.

On April 15 Burford decided to endow a ward in the University of Toronto No. 4 Base Hospital at a cost of S250. Since the local Red Cross has only S90 in the bank they appealed to the public. The response was quick. The Burford Methodist Church donated the collection of $46.50 that had been taken in at the second presentation of the cantata From the Manger to the Cross . This had been one of the largest choral works ever presented involving a choir of 50, four soloists, an orchestra, piano and organ. No. 7 School Section contributed $11.10 from a school concert. Dr. Johnston gave $25 and C.F. Saunders provided a bolt of surgical towelling. Mrs. Percy Douglas announced that she would be holding a euchre party at her home. 25 cents per person, and Mrs. C.F. Saunders gave notice of a surgical towel stitching party at her home at 10 cents per person. Later reports show that Mrs. Douglas raised $10 and Mrs. Saunders manager to squeeze 40 women into her home (now my home) where 52 surgical towels were stitched and $4.05 was raised.

An April 15 an entirely different war fund was started by Sam Smye the local school janitor who. apparently inspired by George Tapley's letter regarding the poor tobacco in France, began to raise a Tobacco Fund to supply Canadian tobacco to the trains overseas In

no time he had collected $20 and the names of 52 local boys who were overseas. Each donor was promised a "red-hot" post card direct from the firing line. The sum of $20 would not buy many cigarettes in 1988 but in 1915 a plug of chewing tobacco or a package of smoking tobacco could be bought for five or 10 cents so it can be seen that $20 could cover a considerable number of "smokes" or chews.

Other centres of the Townshipwere equally active and in Cathcart the Red Cross Society reported receipts of $75 plus $15 from their Red tag Sale. Two bales of hospital clothing had been sent to Toronto and another was being packed.

Another form of military assistance was the collection of newspapers and magazines for the troops overseas. A Toronto organization was preparing to send a box car load of this material and the Bur-ford Red Cross arranged a local collecting point in the Burford Courthouse (lower floor of the Masonic Hall). People wishing to bring papers to this place were asked to get the key from George Everett's store in the Barnea Block.

On May 13 Burford was the scene of a cheap little bit of fraud. A man entered the local bakery and ordered a soft drink. When he was asked to pay he said that he was on his way to enlist in London and did not intend to pay.

Mrs. Cooper, the baker's wife, was unable to force him to do so. He tried the same trick at a couple of stores and in addition asked for train fare to London saying that one of his brothers had been killed in France and another was sick. He did not get away with this and tire local editor remarked that it was too bad that Burford did not have a constable to arrest such people.

On May 22 there was an appeal to farmers to give sums of money up to $50 for Red Cross work. The sum of $50 would provide one bed to the hospital with the donor's name on it. Here again we must remember that $50 went a lot farther in 1915 than it does now. The Advance does not record the number of local donors.

During the summer of 1915 and later there were a number of large recruiting drives held on the lawn of A.D. Muir (now Bill Sprowl's residence) in which Brantford bands played and Brantford politicians and militia officers urged local men to enlist. It was said later that people found it strange that none of the speakers who were so anxious to get others to enlist did not do so themselves and in the case of one Brantford militia officer of considerable importance, when Brantford men arrived back from the war in 1919 they refused to take part in a victory parade from the RR station when they found that he was to have a part in it. 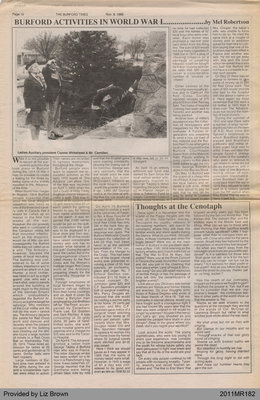