Creator
Robertson, Mel, Author
Media Type
Text
Item Type
Articles
Description
From the 1970s through the 1980s, Mel Robertson wrote many articles for the Burford Advance and Burford Times on the history of Burford Township. This clipping contains the article Over the Counter. It describes the culture of retail business in Burford in the early 20th century. The article may not have been republished.

The erection of Dave McLaren's new store marks the first time since 1905 that an entirely now and separate building hr.3 been put up in Burford for the dispensing of food and groceries. Great changes have taken in merchandising in that period and it may be interest to recall a few.

Probably the most significant change in sett-Service. In the old days customers were separated from the goods by counters and people were employed by merchants to show things to the customers and prepare their orders. The counter was a strict barrier and no one thought of going behind it unices they had specific invitation from someone in authority to do so. Unauthorized invaders of the space behind the counter were automatically regarded as shop-lifters and the term "counter-jumper" was one or derision. No one resented the counter as things moved slowly in those days. Customers expected to be waited on and were prepared to wait their turn, usually sitting on convenient stools and visiting with other hopeful shoppers. Goods were kept on shelves, or in drawers under the counters, and were laid out for examination as require. This arrangement prompted a classical pas by an early Burford merchant named Godney to a man who had exasperated him refusing to make up her mind. After .she had turned down everything Gedney had shown her ha finally said "If you will come behind the counter, lady, I will show you everything I .have in my drawees". This slip of the tongue so insulted the woman that she fled the store and told everyone in the village.

Store employees who waited on customers were called clerks which was pronounced "Chirk". .People who kept books were also culled clerks but was pronounced "clark" in the English manner and since "darks" always fancied that they were a bit than "elurks" it was a social error to mix the pronunciations.

In the merchandising of ties very little was pre-package;] except canned goods and a few other things. Everything else was received by the grocer in bulk and the clerks weighed .up whatever was required no matter how small the requirement. Spices, for example, were kept in large drawers along .with such commodities as flax-seed, sulphur, ginger, salt, etc. and it was tedious task in the pickling season t0 weigh up, package record tiny quantities of ,spices. Other foods received ,similar treatment. Peanut butter came in large pails and was out into little wooden tubs ,for the customer. Cheese came .in his rings and one -thought ,of making a purchase until he had eaten a generous sample of the old, medium and new. Piekles were received in tubs, or firkins, and you brought your own jar.

Much has been written about he old-fashioned cracker barrel ,in the early stores but although I visited many small town stores ,in the 1920's I never saw one. 0n the contrary .Crackers were old from 20-pound tin boxes with closely fitting, hinged, copers. These were kept tightly sealed to preserve freshness and Crackers were dispensed in paper bags as required. I have always considered the nostalgic picture of the philosophic codger sitting on an open cracker barrel, spitting tobacco juice on a hot stove aid spouting corney philosophy was a highly unsanitary dream of city folks who had never been in a small-town .store. I would challenge anyone to say that they had actually seen an open cracker barrel. Like guano in a cuckoo-clock, it is something you hear about hut seldom see.

Coal-oil was another big seller is almost everyone used it in lamps or for cocking stoves in the summer. This smelly commodity was kept in large open tanks in an outhouse from which ,it was pumped into whatever container the customer brought. This could range from a one gal-Jon can with a potato on the spoilt to a large demi-john in a wicker cover. The clerk had to fill the cumbersome things without getting a drop on his hands to contaminate such foodstuffs as unwrapped bread.

Much of the grocery business was done by trading butter eggs for other foods. This was a troublesome practice since .there was no local grading or candling of eggs. Thus it happened frequently that merchants

ex-hanged (food for quantities of rotten eggs that had been picked up from nests in the fields.

These represented a total loss .when sent to the egg graders. Butter was also a problem as .the grocer knew from experience who brought in dirty butter or butter with too much salt. He had to accept everything offered or else lose a customer. Much of the butter received in this .manner was packed in barrels and sold to wholesalers but a certain amount of the best was for over the counter. Such resales also presented problems since there was no uniformity of quality and customers insisted on tasting .butter until they found a "print" that suited their taste. This .was done by taking' a coin, or the finger, and gouging off a bit that was eaten. This may sound unsanitary and disgusting to-day but no one seemed to think it odd in those days and I never heard of anyone catching coniption fits from doing it.

Bananas came in sticks and hung down from the ceiling so that the clerk could cut off "hands" for the customer. This procedure was enhanced sometimes by the appearance of tarantula spiders, tropical beetles or even little green tree snakes, who able to survive since the bananas were not fumigated before arrival.

Delivery of groceries was performed by small boys who came after school and carted orders t0 customers, with bicycles or wagons. Their lives were not beds of roses as the grocer, in the interest of service and retaining customers, thought, nothing ,of sending their delivery boys to the outskirts of the village with a spool of thread or,, some Bother tiny order. The customer was king in those days and that meant that he was king in rain or snow, day or night and the over-worked delivery boy plodded about dragging five gallon cans of coal-oil that had to be emptied into small-mouthed containers at a (Customer's home without a fun, under the windy threats of the housewife of what could happen if a drop was spilled.

Store hours were set by the (Customers which meant that stores were open except when the grocer was in bed. or on iSunday. Eventually there was evening closing on Mondays.

Wednesdays and Fridays and in il910 stores began to close on Wednesday afternoons. However, closed meant little if the grocer lived over his store as there were people constantly Hammering at the door for some trifle. Since the customer was Always right this meant that he was right at mid-night or at Doomsday. Credit was easy in those days and many customers thought nothing of paying their bills on an annual basis, even less frequently, or not at all, as some old account books in my possession can attest. Merchants hesitated to "dun" customers lest they lose their unpaying business and to lose a customer was on a par with losing one's virtue. Clergymen expected and demanded 10% or 15% discount on all their purchases and some carried this to the point of refusing to patronize merchants from their own congregation un-Jess the discount was given. Other people evaded the payment by requesting delivery of .an order and then presenting the startled delivery boy with a - fifty dollar bill knowing full well that he would not have change and would not refuse to -leave the goods. There were other dodges of a more unsavory mature.

I Shop lifting was a touchy thing as there were a number of well-respected families in the village and district cherished cheerful kleptomaniacs. Merchants were told not to create a scene when they stole something but just add it to their account.

Being a merchant in the so-called "good-old-days" was a demanding and thankless task. It gave those who survived a great ansight inTo human nature. There was little good old-days" of merchandising other than the fact that stores served community centres for people who lacked TV, radio and even telephones to keep up with the pews. Anyone who would recall jthese days with nostalgic pleasure either didn't experience them from the inside, or else feeds 15c worth of senna leaf tea. (If you are too young to know about he effects of senna leaf tea; consult your pharmacist stores don't sell it anymore). Burford has had many merchants since the first store was opened in 1812 and has been well-served by them. The latest addition to the business community will be welcomed as have those of the past. 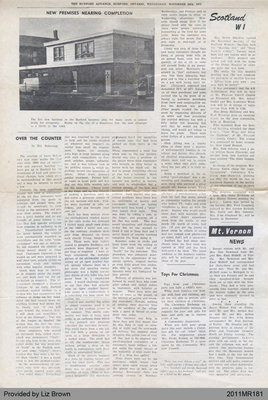