Creator
Robertson, Mel, Author
Media Type
Text
Item Type
Articles
Description
From the 1970s through the 1980s, Mel Robertson wrote many articles for the Burford Advance and Burford Times on the history of Burford Township. This clipping contains the article Summer Uncles. The article may not have been republished.

When I was a child the next best thing to Aunts was Uncles. I did not rate Uncles second to Aunts because we were dominated by Aunts but rather because Aunts were with us daily whereas Uncles were seasonal and therefore more mysterious. By this I mean that some Uncles were Christmas Uncles while other were Summer Uncles depending on what time of the year they made their appearance. Another difference was that the Uncles were real relatives and not "honourary" as in the case of several Aunts. I cannot recall that there were any "honourary" Uncles in the 1920's for, even then, men were rather embarrassed to act as "honourary" uncles and fuss over children the way Aunts did.

Summer was "Uncle" time because I had several uncles who spaced their holidays throughout the summer. I was more in awe of them than I was of the Christmas Uncles for I saw them less and they came from the States.

They were big, hearty, men those Summer Uncles, much given to pince-nez glasses on black ribbons, grey linen suits and Christie-stiff hats with cords to fasten to your lapel in case the wind blew. They talked of big business in Florida and Chicago and one of them knew Al Capone. This latter revelation was of great use to me for in those days of "give and take" it was of value to be able to claim relationship with a Mountie, an Archdeacon or a prize-fighter. These relations were trotted out when one was in trouble and the fear of judicial, or divine, retribution bore heavy on the other guy. In such emergencies I wheeled in Al Capone and the opposition was sure that a tough guy with a "chopper", or Elliott Ness, would be around right after supper. It didn't matter to me that my uncle knew Capone only because he sold him dozens of Persian carpets at Marshall-Fields store. I was certain that if things came to the worst he would give Al a call and the kid who had cheated at Parchesi would have to miss his next "turn".

Yes, my Chicago uncles were big, talked big and made me feel big. In particular, the fact that they referred to the railway station as the "depot" gave Burford a cosmopolitan air and when they descended from the six o'clock train amid that delightful aroma of soft coal, hot grease and steam, the little station became "Grand Central" and the train the "Empire State Express". Their steamer trunks with the labels, conjured visions of P & 0 liners in the Red Sea and were much admired. In addition, they always referred to our 1914 Ford touring car as the "cab" and it was a standing joke for them to tell by Father to put the cost of the trip from the station on their "bill".

Uncles, and particularly Summer Uncles, did not relax much in those far-off summer days before the invention of sport shirts and shorts. Most men, who were anybody, wore summer suits with stiff collars and conservative ties. Now and then, when it was really hot, the uncles recognized the heat by taking off their coats. However, ties were kept on and sleeves were down. Of course, most shirts had detachable collars in those days and to remove the collar left you with an unfashionable neckband and a gold collar-button like a barman would have been found dead without a collar.

Black and white sport shoes were just coming into vogue in the 1920's and were worn with black silk socks. Clothes lines revealed that there was not much style and relaxation next the skin and that men rejoiced in long, cotton, summer drawers or chafed quietly in shapeless knee-length, cotton, balbriggan combinations. Strangely enough, though little thought was given to summer comfort, the uncles never seemed to sweat or complain. Maybe this was because they didn't work at being cool the

way we do. The uncles faced the heat quietly lolling in hammocks waving palm-leaf fans with black bombazine edging and drinking raspberry vinegar or "Dr. Adams Lemonade Extract and Cooling Mixture". They ate three hearty meals a day prepared on a coal-oil stove in the summer kitchen and one of them was given to health fads.

Speaking of health fads, we may think that we are health-fad ridden in these days of lanolin and "aged coffee beans" but I can tell you that these are nothing new for during the "Uncle" days of the 1920's people were much given to medical concoctions and mechanical health devices. For example, at .25 cents a bottle you could buy "Peruna" or "Hypop-hosphites" which would cure you cheaply of dandruff, night-rising and other complaints through internal application. The more affluent ill resorted to mechanical gadgets usually involving electricity or vibration. Among these marvels were "Electro-galvanic socks" for rheumatism, Housemaids knee and the "Twitch". Baldness was treated with electric combs and there were even electrical belts which kept you on your toes through vibration and the odd electronic "goose".

Uncle Jim scorned all such concoctions and devices for he was convinced that only through summer was one ensured of health and longevity. My clearest memory of Uncle Jim, before he died at an early age, was of him tumbling on the back lawn before supper. This treatment went on daily and when it rained I imagine he did his stint in the summer kitchen among the beet greens and the stewed gooseberries.

At least once during each uncle's visit we had a day fishing at the creek. This was a simple outing in those days when cattle were pastured on all the flat and underbrush had not taken over. However, an all-day trip had some complications as it involved at least one hearty meal and the transportation of a heavy picnic basket and a granite pail of luke-warm raspberry vinegar was no easy task particularly if the fish were biting.

Usually we solved this problem by persuading my sister and her friends that a day at the creek would do them good especially if they carried the lunch.

The uncles never caught anything worthwhile for they were too formal in their approach. I am certain, to this day, that no fish of sensibility would bite for a man wearing a silk shirt and tie plus a stiff straw hat. We caught "shiners" mostly and dragged them home, rigid and reeking, for my long-suffering aunt to clean and cook; insensible to the trouble involved in cleaning and cooking a mess of six-inch fish in mid-July heat.

in hammocks they were strolling back at the flats. This was a short and pleasant walk in those days when there were lanes in the Clark Survey. The uncle trips to the creek were different from trips with the aunts in that the aunts always thought up games to play as we went along - "How many four-leaf clovers?", "Let's sneak up on a groundhog and holler Boo, chains for princesses wrought with looped dandelion stems and other simple joys. By contrast, the uncles walked along sedately picking their teetch, belching in a dignified manner and recalling their youth. We tagged along quietly chewing clover and wondering if the animal under the tree was cow or a bull. Generally, our approach was so quiet that sheep would start up under our feet and flee like angels caught swimming in the nude. All was so quiet among the alfalfa and milkweed that the sound of the post-office clock told us when it was time for tea. Then the uncles took a bearing on the Armoury tower and hastened for home in time for the current scones and blackberry jelly.

And so those locust-loud and dreamy summers passed in the gentle company of Aunts and Uncles, lemonade and parasols and tea-tables on the lawn. The train blew at the "Depot" for the last time and the Summer Uncles were gone, leaving us with happy memories and a wild-rose pressed in the pages of "Tom Swift and his Supersonic Thunder Box". 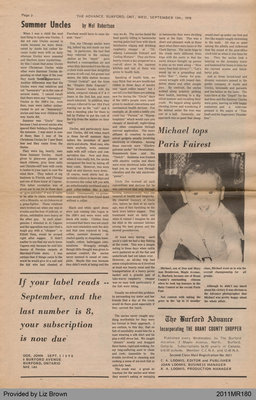