Creator
Robertson, Mel, Author
Media Type
Text
Item Type
Articles
Description
From the 1970s through the 1980s, Mel Robertson wrote many articles for the Burford Advance and Burford Times on the history of Burford Township. This clipping contains the article Come to the Party. It describes social gatherings in Burford in the early 1900s. The article may not have been republished.

HISTORICALLY SPEAKING: Come to the party

The accompanying photo, which has been enlarged by local photographer Tom Need-ham, depicts a large Bur-ford area house party. The location is not known but the older man on the right was the host, or the father of the hostess. The time was around 1900 and the people include my father and mother (second row, second and third from the right), Emily Terryberry (front row, third from the left), Irene Mclntyre nee Terryberry (front row, fifth from left), and Nettie Lounds (second row, third from left). Most of the young people seem to be in the 23 to 26 year age bracket and include the parents and grandparents of many local people. The photographer is unknown but it might have been Ernie Burgis, a Burford pharmacist and photographer. The picture would have been taken with a flash-powder apparatus which went off with a boom and filled the house with smoke. In many old photos this caused the person being photographed to jump with surprise resulting in a terrified, open-mouthed, photo. It is remarkable that in this picture none of the 40 people concerned show any degree of alarm. The party is typical of the many large house parties of the time. Now, thanks to the availability of old diaries, letters, post-cards and newspaper items it is possible to describe the house parties of almost 100 years ago.

To understand the big parties of long ago we must understand the times. Since there was no TV, radio, stereo, etc., people had to plan their own entertainment. The lack of motor cars kept people closer to home and the scarcity of telephones made it impossible to arrange spontaneous parties. In addition, there was a more formal approach to life and people did not just "drop in" for an evening in the way they do now. There was also much more formality in the relationships between the

sexes than today. For example, today it is not considered to be rude or suggestive for a hostess to greet guests with a kiss on the cheek. In 1900 this would have been considered to be very "forward" and great umbrage would have been taken. Another governing factor was that in 1900 there was great opposition to "drinking" of any sort and consequently the "cocktail party" atmosphere of 1988 did not exist.

Entertaining people at a house party in 1900 was no spur-of-the-moment thing. Planning had to begin at least two weeks in advance. Guest lists were examined carefully for (like it or not) there was considerable "class consciousness' in the early 1900s, probably encouraged by the many "class conscious" English immigrants. People knew which "class" they belonged to and it was rare for people of different "classes" to mingle at house parties. Another factor that affected guest lists was house size, but since most big houses had double parlors, plus a dining room, it was not uncommon to have parties of the size shown in our photo. Romantic connections had to be considered and it was important for the hostess to know who was "going with" whom so that courting couples would not be broken up. Current family feuds were examined to ensure that ill-disposed people were not included and people who could help the entertainment with songs or comic skits were sorted out. Finally, the hostess would scan her list for young men who smoked or chewed tobacco. There was great opposition to the use of tobacco in 1900. Churches railed against it and the authors of marriage counselling books declared that any man who used tobacco would have trouble winning a wife adding that if they managed to do so their wife would shun "the marital embrace". Hostesses did not, of course, expect

that anything like a "martial embrace" would take place at their party but they wanted to be sure that their house would not be "stunk up" with cheap cigars or that their geraniums would not be killed by someone using a flower pot for an impromptu cuspidor. Finally, when everything had been given due thought the invitations were gotten out after church, at choir practice or by penny postcard. Then, on the appointed evening, these would be a great flurry of horses and rigs in the yard and the fun began.

When all were assembled, how did they spend the evening? One of the chief means of entertainment was either "Charades" or "Statues". These games could be played easily as houses with double parlors usually had curtains in the arch between the rooms. Thus, the front parlor could serve as a stage whereas the back parlor could hold the audience. For those who are not familiar with the games of "Charades" or "Statues" they were played by choosing up two sides. In "Charades" a word would be acted out by one side while the other tried to guess what it was. "Statues" was similar except that one side would create a silent, posed scene, with people acting as statues to depict some event such as the Coronation of Queen Victoria and the other side would try to guess what it was.

Other party games included "Blind Man's Bluff" in which a blindfolded man would attempt to capture girls and identify them. Another version of the "Guess Who" games was for girls to reach through the parlor curtains and by feeling the face of a young man in the darkened front parlor would try to identify him. There is even one newspaper report of a house party where "Bull in the Ring" was played. This was a game where either the men or girls would form a hand-holding circle. A young man or girl in the centre would then attempt to break out of the ring. This was really too boisterous for a house party but since a bit of clandestine cuddling was involved some people liked it.

There was seldom any dancing at a house party for two reasons. First, most houses had tacked-down carpets which were not conducive to dancing; and second, all the local churches, except the Anglicans, considered dancing to be immoral. However, several large local houses had ballrooms and sometimes pseudo-dancing such as "Sir Roger de Coverly" was tolerated. Most card games were under a similar religious ban although games such as "Snap", "Old Maid" and "Lost Heir" were acceptable. Other games including dominos, crokinole and parchesi were played by those who did not want to participate in the more boisterous games.

One of the most popular features of a big house party was singing around the piano or organ, and since many young people were accomplished part-singers this could be most attractive. Sentimental songs such as "Oh that We two Were Maying", "Love's Old Sweet Song", "Afton Water", "In the Gloaming" and "The Faded Coat of Blue" were popular and if anyone had brought his violin, accordion, mouth-organ, or cornet, complicated descants and obligattos would be attempted. Singing around the piano or organ usually resulted in impromptu solos, duets and quartettes as the singers warmed to their task.

At the more "advanced" house parties kissing games such as "Post-Office" or "Spin the Bottle" might be played. In "Post-Office" a blind-folded player would be led into the darkened front parlor where he would be asked if he wanted a letter, a parcel or a stamp. A letter meant a kiss, a parcel was a hug, but a stamp was a stamp on the foot or a swat on the ear.

The closing feature of all house parties was a big sit-down meal and since there were no convenience foods in 1900 such as dips, prepared salads, prepared cold

cuts., etc. everything had to start from scratch.

The lack of refrigeration meant that if ice-cream was to be served it either had to be cranked out at the last moment in a home, ice-cream machine or else someone had to make a fast, late trip to Brantford. Preparations for a late night supper were hard work and even though many families employed "hired girls" the hostess, her mother and assorted maiden aunts were hard-pressed to assemble the food. Nonetheless every diary, newspaper report and letter that I have consulted attest to the abundance and variety of the food and the pleasant way it was served.

And so we have a photo that captures one moment of happiness in the lives of our parents, grandparents and great grandparents. When we look at this picture do we think of them as they were then or as we knew them when they were old, tired, sick and intolerant? Are we surprised to realize that they once had moments of carefree happiness and that they once thrilled to the touch of a dear hand or a tender goodnight kiss? Probably in this age of computerized, electronic speed we do not have the time, or inclination, to do so. However, it might do us good to consider these^..-things for a moment as brief as that which was consumed in the taking of this picture.

Note - If anyone can identify other people in this picture I would be pleased to hear it. 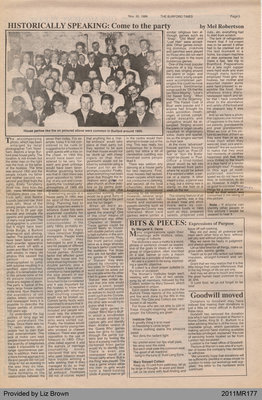