BY MEL ROBERTSON May 13th, 1909 Burford - Editorial - In reply to a tetter from Boys Well Wisher who compla ined that boys were running the streets and smoking cigarettes the Advance editor wrote that he was a Lover of Boys (Imagine using such a phrase today!) and that to him a boy was any mate between M and 20 who had no club and nothing to do. The Editor offered $5 to start a fund for a boys club which would have fieW days, picnics, steigh rides and sports. He also Iblt that a good, boys, black, minstrel troupe might be set up by the ladies to help the boys. (This may sound very racist today but in the early 1900s people took pteasure in making fun of Irishmen, Scotsmen, Dutchmen and black people Many nasty jokes and skits were directed at these people.)

Burford Letter from E.A. burgis the druggist and photographer re the boys club pointed out that in 1907 the Sports Committee had rented the fair grounds building, for a sports club but had been faced almost immediately with a bill of $20 to cover broken windows that had been smashed deliberately with stones so big that even the wire screens had been dented. He also said that it was hard to get Burford boys interested in sports teams as so many wanted to be paid for playing.

Princeton - We are sorry to hear that Mr. W. Charles was in a serious accident in Chicago recently. He was run down by a fire marshal who was driving furiously to a fire. He is in St. Aikes Hospital in very bad shape.

May 13th, 1910 Burford A very successful bee was held on Wednesday to put the cemetery in shape. Fully half the owners of plots from Norwich, Brantford and other places turned out to clean things up We hope others will follow this good example and stop throwing papers, banana skins and rubbish on the streets. Note It looks as if both the living and the dead needed a good cleanup.

Cathcart Mr James Milmine has entered the service of the Bank of Toronto He has just completed a course at the business college in Brantford and is highly recommended. He is the ninth Burford boy to enter the service of the bank through Mr. A. I. Muir, the manager Burford. The area was shocked to hear of his sudden death of Isaac Brock Dickie on Monday morning last. Mr. Dickie who with his brother and farming on the Thos Murray farm, was drawing out manure when he stumbled and the wagon passed over his body crushing his heart. Mr. Dickie was 50 years old, unmarried and the son of Col Dickie.

FairfieW Plains Mr. Haywood Malcolm lost a fine horse recently When he went to feed the horses in the morning he found that one had broken its leg during the night and had to be destroyed.

Bishopsgate Great credit is due to Mr. Richard Andrews the new Pathmaster who has made the road between Bishopsgate and Burford second to none. 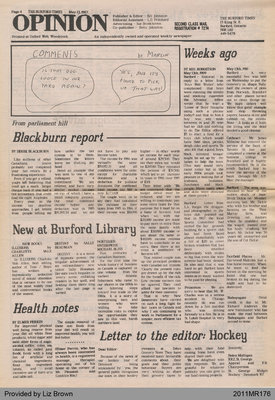