Fine concert in the Congregational Church on Xmas night. There were three solos by Miss Ogilvie of St. Thomas and Mr. Will Hunt sang "Rock of Ages" during the tableau. The Rev. Bryon Simmonds was presented with a gold watch. Proceeds were $50

Miss Clara Peckham of Normal School Hamilton is spending her holidays at home. NOTE-Clara Peckham taught many of Burford's business men and women at Burford P.S. in the 1920's. She moved to B.C. and was still alive and active in recent years. Can anyone advise if she is still living?

BURFORD; Police Trustees D.G. Hanmer, T.S. Rutherford and A. B. Messecar were elcected by acclamation.

BURFORD; Letter to the Editor from George Pile urging Council to get sidewalks to the RR station, more passenger cars on Saturday and an Express office in the village.

The meeting was described as "Spirited".

BURFORD; Many falls were recorded

on Election Day but no injuries..The streets were in terrible condition.

BURFORD; The Ladies Aid of Burford Methodist Church is holding a 10 cent tea at Miss Sara Carter's on Jan. 14.

BURFORD; Owing to the slush ice at the generating station at the mill the Company is experiencing difficulty in keeping up the lighting. Three men are employed in keeping things going. NOTE-This was the local Hydro company that operated a generator at the mill on the creek (now Jack Whitehead's property). It was a pretty amateur operation as lights were turned off at 11 p.m. and there were many interruptions due to high water, ice, etc.

CATHCART; A little son came to brighten the home of Mr. and Mrs. Wm. Stephenson.

Princeton; The ball given by A. Squadron, Grey's Horse Regiment on Thrus. evening was very enjoyable. Music was by the London Harpers. The boys in their uniforms made splendid hosts and the hall was decorated with flags, cedar and bunting.

BURFORD; King Carnvial ruled at Bur-ford Rink on Friday last it being New Years Eve. Over 100 attended. Many of the costumes were excellent. The New Year was well-skated in.

BURFORD; On Thursday a hockey match was played between Burford and Harley. It ended in a tie 4-4.

CATHCART; Mr. C. Kelly out tax collector reports that there are many more arrears in taxes than ever before. 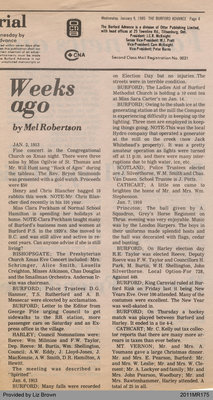