Burford - We are glad to see that a street light has been installed in front of the post office (behind Sprawl's store).

We also need OK of the public school as it is the darkest place in the town and evil things are going on there. Note - The "eyil things" meant kids smoking cigarettes.

After the near explosion of the Armoury gas plant the government' has installed electric light. We would have had a very bad fire if Sgt. Gavin had not been on his toes. An explosion was averted but the plant was badly damaged and out of business. Sgt. Gavin was covered with white powder in saving the plant and was nearly choked by the fumes. Note - Sgt. W. Gavin was the live-in caretaker. This near-disaster made others put in electric light.

Burford -- An inspection of the Burford Armoury was

carried out by Lt. F. Gilmour of the Royal Canadian Dragoons and Major M.F. Muir. They were royally entertained by Mrs. William Cavin.

Gilmour said that the Burford Dragoon stores were the best he has ever seen and that Sgt. Gavin was the best caretaker in Canada. Note - At that time the caretaker at the Armoury lived in the rooms off the tower and in the basement. Since there was no running water or plumbing this was a very inconvenient situation.

On Friday night in the Barnea Hall a concert was given in aid of the Burford Library. The Burford band played the "Zonda Cake Walk", the Scottish Medlev, and the waltzes "The Impassioned Dream" and "Tres Joli". Mrs. Scrimger gave a monologue. Jack Lawrence Alice Smith and Grace Charles sang. Very few attended. Note - I guess Burford people were getting tired of hearing the band play the same tunes over and over. 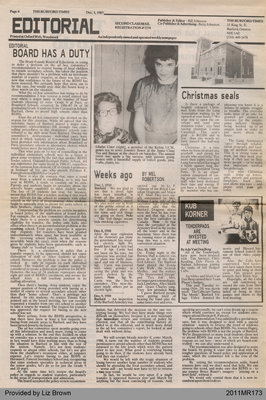