Headline - "King Herod in Burford.' This seems to have been a strange headline for1 a Christmas Eve newspaper but it was in support of the vote to outlaw the sale of liquor in Burford and the Biblical text was, "Herod will seek the young child to destroy him" meaning, of course, the bad effects of over indulgence in alcohol.

Burford - People who have not equipped themselves with a pail and ladder after their houses were inspected recently had better do so as the law requires it in every home.

Burford - Mr. Brethour and nephews were winners at the Fat Stock Show in Toronto recently. They won two first, one second and two thirds for their hogs.

Burford - The new Town Hall at the corner of William and King Street was opened with a tea meeting. Mr. Woodin built this building. Note -The building was a temperance hall. It was burned in an arson set fire to protest Mr. Woodins stand on temperance.

Dec. 31st, 1909 Burford - The radial line from Ingersoll to Paris is being revived but does not include Burford as previously indicated. The original intention was for the line to run along King St. to Salem, Cathcart and Muir.

Burford The militia officers have received their new cap badges and buttons. These are very beautiful and include an Indian head and bow and arrows. The military tailors are presently working on the new Mess Tunics and Jackets. In January at least 12 officers and men of the Dragoons will be attending the Royal School of Cavalry in Toronto. Note - Burford was very military minded in 1909 both with the dragoons and the Boy Scouts. Almost every man and boy belonged to one or the other. The Royal School of Cavalry in Toronto had British cavalry officers as instructors. When Ben Force and my uncle Mel Woodin attended they had to resist many attempts by the British officers to get them to go to England and join their regiments. 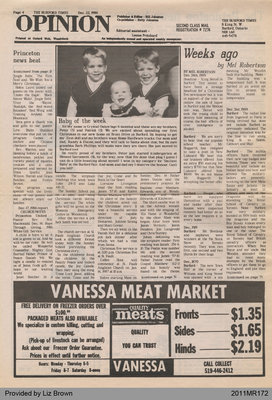