BY MEL ROBERTSON Nov. ttth, 1910 Burford - Editorial Many Burford People going to Brantford market cannot get their mail when they come home as the Post Office closes at 6 p.m. Could not our

Burford Mr. A. W. Eddy has turnips weighing 20 pounds and many at 15 and 16 pounds. These beat Mr. Smiths Turnip of last week.

Burford - The Boy Scouts are making progress with their musical maze drill. The Burford orchestra will help them. Any man or woman who can assist will be welcome in helping to get the Scout Concert arranged.

Nov. 16th. 1909 Burford Editorial Comment - Hurry up if you want to catch the morning train to Brantibrd. It is now arriving eight minutes early. Note - When trains were the only quick means of transportation to Brantford the RR station was a very busy place.

There were four Express passenger trains a day. On one occasion the editor wrote, The local express was on time last week and a lot of people missed the train." During summer excursions to Niagara Falls it was a common thing for 1200 local people to take the trip and sometimes double engines and two trains were needed.

Burford - We regret to report that Mrs. Archie Litchfield missed her footing on Mrs. Coxs stairs last week and fell, dislocating her arm. She was driven to Brantford to her sons home where it took two doctors and a nurse to get the arm back. She may lose the use of the arm.

Nov. 18th, 1910 Burford - The Public School Debating Society met on Nov. 8th. Miss Evelyn Luard held the chairGeorge Luard gave a talk on Travel now i* 70 years from now. Note Since 70 years from 1910 would put us into the 1980s I wonder what George had to say? Aviation was in its infancy but I imagine his talk would have mentioned flying.

Norlhfieid Seth Caldwells son Leo had a painful accident on Saturday evening. While separating milk his mitt caught in the machine and he was thrown round and round, breaking his elbow. 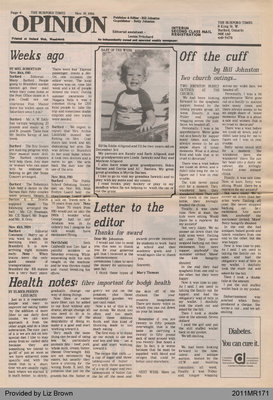