Princeton Mr. A Yarrington is very low He was ploughing whei he struck a large store and was thrown on lever and sufferec internal injuries.

Burford If 20 subscribers will pay then subscriptions to tht Advance we should enc the year in pretty gooc shape.

Burford - The Epworth League Rally was a greal success at the Methodist church on Thursday despite the bad weather Addresses were given by Mr. J. McEwen, The Rev J. Neill, Will Cook and Miss Ida Jull. Messrs McWebb & Hess sang a duet, Joe Daniels a solo, Chas. Howey an instrumental solo. A male quintette from Bethel sang. Miss Maude Gurney sang a solo and Miss Edith Gurney and Miss Malcolm of Fairfield gave recitations.

Burford - It is too bad that the boys did not complete the destruction of the old blacksmith shop west of the hotel on Halloween. It is a disgrace to the village. Will no one do something about getting rid of it?

Nov. llth, 1910 Burford - The Board of Trade has decided not to push for closing the village cemeteries or to having a weekly Live Stock Market. Mr. Cox announced that unless money was available at once the Public Library would close and Burford would lose 2000 books. Note - The closing of village cemeteries was a long standing suggestion. In the 1886 Burford Times the editor suggested, on a number of occasions, that all cemetery residents be exhumed and their bodies moved to a cemetery outside the village. The reason for this ghoulish suggestion was that the cemeteries gave the village: a poor image and took up valuable ground.

The Times editor said in 1886, "We don't need dead people. We need live men and men with money too." Was this some kind of a poor joke or an equally poor suggestion?

comment One of the most disgraceful sights seen in Burford is boys in their teens smoking cigarettes. They should be horse whipped and sent to Reform School. Note - Imagine such a suggestion in 1986!

Scotland The Baptist Oyster Supper drew many people and over $100 was taken in. Miss Jackson, an elocutionist from Brantford, entertained. 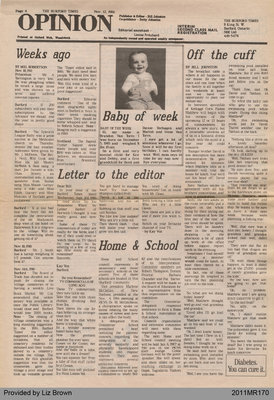