BY MEL ROBERTSON Oct. 28th. 1910 Burford - The arrival of Penmanfe Mill in Burford has been delayed. The Board of Trade president Dr. F. Johnston and CF. Saunders visited R. Thompson, the Penman manager Burford is no worse off than before if the company does not come here. Note - White Penmans never came to Burford there were attempts to establish knitting; mills in Burford on several occasions. In the 1920s a mill got

started but only lasted a short white. There were tates of monumental waste and mismanagement before the mill closed. There were many crooked deals involved. In one case a shareholder was abte to unload his shares after the mill closed by rushing to unsuspecting farmers who had been too busy to read the morning paper where the dosing had been announced and offering them shares at reduced prices.

Women with big hats spoil church services. We should adopt the old system of having men on one side of the church and women on the other. We should all go to church more plainly dressed. Note- Imagine

Burfocd - The Methodist church celebrated its anniversary on Sunday. The Rev. Mr. Kerruish spoke at both services assisted by the Rev. BY. Tippett of the Congregational church. Mrs. J. McCallum sang, as did Miss Hall of Brantford.

continued until the small hours.

Hartey - Last Saturday Mrs. W. Shdlington was injured when her rig was in collision with an auto. This was hit and run but the car licence was takea and was from Niagara Falls, N.Y. Constable Kerr is looking into this.

Cathcart - At the Congregational Parsonage on

Wednesday, Oct. 19th Hellie Cronkwright was married to Charles Lawrence by the Rev. BY. Tippett. They will reside at Mr. Lawrences farm in the village. Note - In going through old newspapers for this column certain names stand out as people you feel that you have known and who, despite the passage of years, seem to still represent lively personalities. One such person is the Rev. BY. Tippett of the Burford who came here as a young man. Does anyone know what became of him? 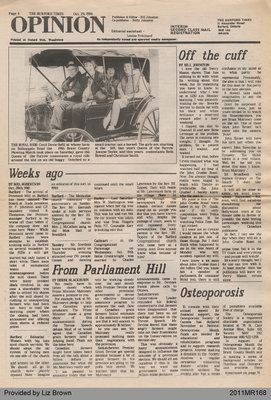