Burford - Many cigars were handed out at the Grand Smoking Concert of the Board of Trade. Over 100 attended. A.G. Ludlow took a leading part. The program was good: organ solo - Louis Thompson, organist Holy Trinity church; violin solo - Mr. Nolle. Mr. Ludlow spoke on the need for hydro in Burford. Col. Muir "was the guest speaker. He said that with its Teutonic background Canada was bound to become a leading nation in the Empire and the world. He regretted that the large influx of southern European people did not fit into the British Empire scheme of things. He felt that the British monarchy was the bi'"-,i svstuvi foi fn.vdofn. Note - A.G. Ludlow (known as "Aut") was one of the founders of Lud-low's Men's Store in Brantford. He and his brother Charlie had many connections with Mt. Ver-non and Burford. I don't know which of the Muir brothers is referred to in this news item as all were military men. His comments re the British Empire were favourite comments in the years before World War I when there was such jingoistic pride in the warlike accomplishments of the British Empire.

Burford John Cunningham of Paris has just installed a steam heating system in the home of Aaron Rutherford. Note -Many Burford homes received steam heating systems in 1911 which were only moderately efficient. I had a separate steam heating system in my conservatory complete with a separate boiler and furnace. The home-owner who installed it let it freeze up after a year or so and wnen we took over it posed a big problem in getting rid of all the very heavy radiators and pipes. Several Burford people have had the same problem recently in renovating old houses.

Oct. 28th, 1910 Burford - The "Advance' reprinted a letter written by an Englishwoman to the London 'T)aily Mail" giving advice to Englishwomen coming to Canada. Her advice was that any Englishman coming to Canada to farm should bring a good strong woman with a sense of humour. She advised such women to always wear

their best clothes when going for the mail or for groceries, to drink tea

with their neighbours, never to brag about England and to learn how to eat corn on the cob. She sneered at Canadian dances saying that only young people danced in Canada and that all the dances were slow and stately with no "hopping" dances or other boisterous steps. She went on to say that the girls always arrived first at a dance and sat along the wall. After a time the boys would burst into the hall in a group and would ignore the gins completely until they had shaken hands with each other and said "How are you?" After each dance the girls would retire hi silence to their seats by the wall and the boys would ignore them until the music started again. As for lunch the boys would retire and return with heavy cups of coffee and massive plates on which thick sandwiches with their crusts on were piled. The boys then served the girls and you were supposed to take a lot of sandwiches and put them in your lap. The woman also wrote that Canadians played euchre for hours in houses where the temperature was 80 or 100 degrees. She advised women to wear their summer clothes all year. This letter caused considerable annoyance in Burford since so many young English wo-tnenanamen were being brought here by Reginald Grey and C.F. Saunders. The "Advance" editor was so angry that he sent a copy of the "Advance" to the editor of the "Daily Mail" telling him that Canadians were just as proud of Canada as the English were of England. Note - It seems probable that this letter was intended to be funny but Burford people felt that it treated them as "stupid colonials." Actually very few couples were being brought out. Girls were

brought out to be maids and boys as "hired men."

Burford - Judge Hardy and Mr. W.R. Nurse the Inspector of Public Libraries met R. Grey and Dr. Johnson regarding the reopening of the Burford Library. They recommended that a street level location be obtained and that the Library Committee should try to get support from Township Council to qualify for the $25.00 grant from the County and the $30.00 grant from the government. Note - The Burford public Library-opened and closed almost as many times as the Bur-ford Board of Trade. The Library committee faced great opposition from people who felt that reading was a frill on which taxes should not be squandered. In 1966 the Library reopened through the efforts of Shirley Robertson, Edna Austin, Walter Littell and Vince Ion. It operated from the Customs Room above the Post Office for a couple of years on a volunteer basis and then with support from the Council moved to its present location. 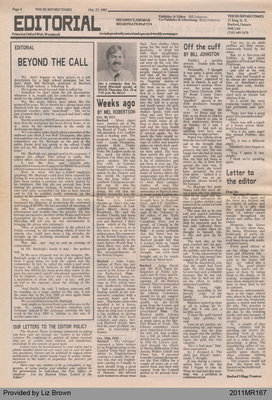