Burford Club Rates: The Advance with the Family Herald & Weekly Star' plus the picture "Home Again" - $1.50 per year. The Toronto Daily Star plus the Advance -42.00 per year.

Burford: This week we will move the entire office of the Advance into the east side of our present building (east of the Post Office). We are moving in order to keep the Library separate from our business. With our new cylinder machine we now have one of the best printing offices in Ontario. NOTE: The Advance editor George Pite was also the librarian.

Burford: The Burford Bakery is this week baking 100 extra loaves for Mr. John Bonney of the Harley House to feed the hungry on Harley Show day next week. They are also roasting a large beef and 24 turkeys.

Burford: The double String bass Viol for the Congregational Choir and manufactured in Switzerland has arrived. It is a monster over 7 feet high. NOTE: Most of the church choirs of the day used instruments to assist the rather weak music of the reed organs. The Methodist church at the time had a new "Silver cornet" to help their organist.

Burford: Miss Carrie Herrett formerly of Burford but for the past 9 years in the Washington Territory has visited her relatives recently. She was 144 hours on the train getting here. NOTE: This refers to what is now Washington State on the West Coast.

Burford: On the night of Oct. 3 the Rev. T.S. Howard of the Methodist church lost his heavy shawl out of his rig while driving from Falkland to Mr. Ledgers near Burford (red brick house west of Box's Garage). This shawl is well known in Burford and anyone finding it should leave it at Gedney's store or the Methodist parsonage.

Mt. Vernon: On Tues night a fowl supper was held in the former home of Wm Ludlow. Rev. Mt. Todd acted as chairman. Solos were sung by Miss Lillian Mott, Miss Muill and Mr. Chas Douglas and readings by Mrs. Wm. Scrimger. Offerings on Sunday and receipts from the supper were $200.

Burford: Mr. Alan Kneale has recently improved the hall over his store. A new floor has been installed and the main entrance has been improved by adding a winding stair. When papering and painting has been completed it will be one of the best halls around.

Burford: Ad in the "Advance": "Sowing your Wild Oats" by Drs. Kennedy and Kennedy of Detroit: Excesses such as "Wine, Women and Song" will lead to Varicose veins, Nervous debility and loss of memory. Do you regret your past life? Do you trust to luck? Dr. K & K are your refuge.

Burford: Mr. J.G. Hanmer won the Challenge Trophy at Caledonia Fair for the best mare. He also sold seven head of his prize-winning Shropshires to the Manitoba Agricultural College.

Last year considerable damage was done on Halloween night and the Sunday morning exhibition in the village was disgraceful. We hope this year the police trustees and magistrates will look after this. NOTE: In those days and up to the late 1920s it was traditional to block the main corners with outhouses, farm machinery and trash. This posed a traffic problem but since there was little night traffice no one was injured.

Burford: We noticed last winter that many visitors to the village tied up their horses and left them without cover of any kind. D.R. Hamilton has horse blankets for sale. You will not regret your purchase and your horse will bless you.

Burford: There is much building in Bur-ford at the moment. Work on Mr. A.D. Muir's house is nearing completion and the splendid verandah that has been erected makes the house very attractive. Across the street beside the Armoury are the splendid residences of C.F. Saunders and Stewart Jarvis both of which have been erected in the most up-to-date manner. We tried to get a few particulars from Mr. Saunders but he is a hard man to "pump" but he said that all the material for his house was bought in the village. We could not but help ejaculating "Well done". NOTE: The A.D. Muir residence is now the residence of Mrs. P.A. Sprowl. Mr. Muir told me once that the verandah was a birthday gift from Mrs. Muir's father, Mr. LaPierre. The C.F. Saunder's house is now mine. It contains a number of difficult features. The Stewart Jarvis home is now the residence of Wilfred Butterworth. Former residents were Mr. Nidas Force, Mrs. McKay and Mr. Secor Johnston. 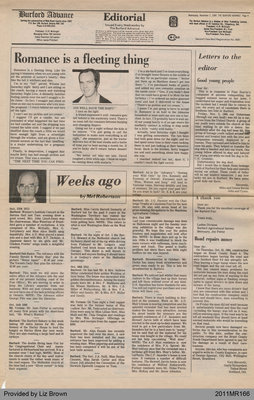