BY MEL ROBERTSON April 19th, 1910 Burford You can make $50 a week selling water colour portraits complete with glass frame for $1.98 One' man even made $22 a day selling these portraits. See the Advance office regarding this.

April 21st, 1911 Burford The purchase of five acres of land by the Canning Factui y i? now accomplished and there will be room for expansion No doubt with the opening of the North West there will be many sales of canned yuods; and the RK station will be a busy place. Note The Canning

Factory buildings are still there but there has been no canning for many years In the 1920s peas and corn were canned and Burtbrd children were employed at 25 cents an hour. Some of the work was hazardous and at one time a man got caught by his belt in a machine and after a time the pounding of his head on the floor told people that there was something wrung.

Burford Mr &. Mrs Richard Denby celebrated their 0 olden Wedding Anniversary on April 14th with a wedding dinner. All the family was present from many far places

Scotland The Scotch evening Social of the Congregational church was held at the home of Mr. Robert Taylor on Monday night Over $23 was taken in. It will be used to buy music for the choir One part of the entertainment was a skit on "Womens Rights' which was very humorous

Burford A new bakery will open soon if gas can be found to operate the machinery So far a "Gusher" has not developed. Note There was drilling for gas near Cathcart and on the Oakhill road but without success.

April 22nd, 1909 Burford ft was great to see the stalwart members of our bowling community with coats and vests off manfully dragging the heavy roller over the billiard like bowling green. It was great to see them sweat! There will be no sale of fat reducing pills this week. Note The

bowling green was behind the township office on the ground now used as a parking lot. The Advance editor enjoyed insulting anyone who took part in sports during the day when everyone was supposed to be engaged in useful labour" He got into a real snit when stores began to close on Wednesday afternoons and store keepers who stayed up to all hours to serve customers, had a bit of time to relax

Burford - The public park scheme has fallen through as the owner of the land (now the old Armoury property) has foreclosed Over $346.00 was raised Note This property which included all of tiie block bounded by King, William and Dufferin was the original parade grounds of 1798. It was also a cricket grounds and a football field and at one time had a saw mill in one corner.

Scotland The public appreciates the RR station as 24 trains pass over the T.H. & B. every day and there is a lot of business, both passenger and freight.

April 22nd, 1910 Burford A bylaw requiring a licence of $15 to any store selling tobacco has been passed. We think this is a bad move as this will drive away business We support local option but to deprive a man of his tobacco is too much Note This referred to chewing and pipe tobacco as: there were no cigarettes.

Burford Dr. T.D. Rutherford has improved his property by raising his barn and building a drive shed and stable under it. Note This is now Pryor Harris

propel The hay loft this barn was used a a boys boxing ring in the 1920s when Dr. Rutherford was trying to teach local boys how to box.

Burford Over 70 pupils of the Public School are engaged in getting the school garden ready for planting. Mr. BT Dickson is getting seeds from the Forest Nursery, Guelph soon and trees will be planted. Two gentlemen have ottered a $2.00 prize for the best garden and $100 for the second best.

Burford Editorial Why do we not. have a good baseball team? Lots of players are playing in Uu- sir vets but they want to be paid. Come on, boys, forget the money. If you are short a man the editor will play but you will have to get someone to run for him. Note Even in 19K) ball players wanted to be paid! Not in the millions as todays Blue jays but probably about 25 cents a game. 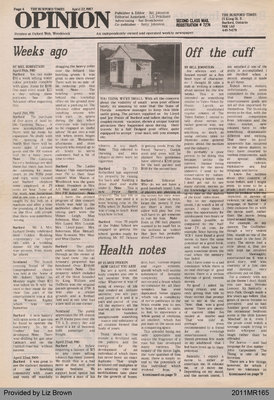