Burford School trustees have the brick ready for a new public school and will start work this summer. Trustees are Dan Smith, Geo. Shaver and G. Armour. The school section is No. 16 of Burford Township.

and the Methodist church at Vittoria (west of Burford).

April H, 1871 Little Grace Cox had a bad fall through a trap door at her fathers store recently and escaped

with some injury. Note -This was Sprowl & Son Store at the corner of King & Maple. The Coxes lived upstairs. This building was also the site of a tragic death when a little girl fell into an open cistern and drowned.

The home of Mr. & Mrs. Van Camp, Burford was destroyed by an arson started fire. This was a very sad affair as old Mr. £. Mrs. Van Camp had just got their home in good shape. Note This was at the corner of No. 5'$ Hwy. and the West 1/4 Ibwnline. Mr. Van Camp was reputed to have been among number of patriots who were sent to Tasmania after the Patriotic Rising of 1837.

Burford Advert. CF Saunders If you are considering matrimony it is your duty to insure your lite. If you buy insurance f will throw the licence in free. Note C.F. Saunders was also the Notary who issued marriage licences.

Burford A meeting to form a dramatic club was held at Mrs. Geo Aulseybrooks bul alter a good deal of discussion it was agreed to postpone the formation of a club for the present. Note -Burford had a strong dramatic club for many years that put on regular plays at the Barnea Hall Among the actors were the Rev Geo Kelly, Roy

Fairfield One of our farmers was summoned to Brantford recently and fined heavily for the breach of the dog bylaw. We cannot understand this as Mr has

Burford A Star race will be held on May 24th

Let. us; hope every school will take part. This is the 3rd year of the race. Archie Secord of Cathcart won the first year and Clarence Standing of Fairfield won last year. A handsome shield is offered to the winner

Princeton AY.P.A. Debating Society held a debate last week on the subject, Resolved that poverty is a better educator than riches' The affirmative was Mr. J. Wilson & Mr. W. Marray and the negative was Mr. D. Dickson & Dr. Sutherland The affirmative won by one point. Judges were Mr. A. Lattimer, Mr. A. Hewitt and the Rev. J Hale.

April 11, 1915 Burford A bale consisting of 20 grey shirts, 30 pair hand knitted socks, one scarf. hospital gowns and pajamas, two quilts and a cheque for $15 was sent to the Red Cross in Toronto.

Bishopsgate A reception was held in the Presbyterian church on Wednesday evening to welcome their new pastor the Rev. Mr. Moody, M.A. The new pastor lias spent eight years in China as a missionary Burford - Mr. Frank Lee of the Dufferin Rifles, Mr Kd Godden of the 35th High landers Hamilton and Mr. Sam Rirchley of the 37th Hegt. spent Sunday with Mr John Farrell before leaving for the Front in trance.

Burford - The Burford Egg Circle is now in operation with Mr. Geo. Everett as manager. This society furnishes the best way for disposing of eggs. Anyone interested call Mr. Everetts store No. 17 or take your eggs there.

New Durham The Rev. Byron Simmons occupied the pulpit in the Congregational church on Sunday and preached on the topic My soul is among lions.

Burford We are glad to see that a number of people who left Burford a tew years ago to make their fortune in the North West have come back. Old Burford is not such a bad place alter all.

Scotland The community was shocked to hear of the death of Mr. Lewis Holt. Mr. Holt had a stroke three years ago and had caught a heavy cold recently. Mr. Holt who was born in Ml. Pleasant lived on the 10th concession.

Burford The Methodist annuaJ congregational meeting was held on Wednesday evening and over 125 sat down to supper. An excellent financial report was

meeting Mr Chas. Howey entertained the meeting with his phonograph.

Burford Miss Sadie Tapley has received a letter from her brother George in France. He said that he had been, trying to write for days but was always being called u> look after the horses in the stables He said that the guns were roaring all the time and that the Germans were being blown out of their trenches and were on the run. He said the French tobacco wasn't worth the powder to blow it up and wanted some MacDonalds or some Briar Note The optimism of 1915 didn't mean much as the war went on for three more years. 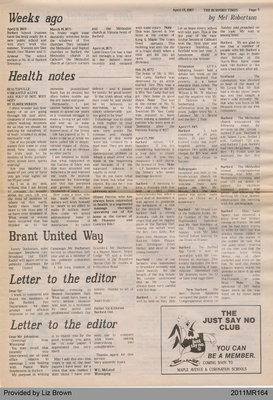