Scotland - Mrs. Robert Taylor gave a delightful At Home" to about 50 ladies to honour her sister in law Mrs. D. Smith. Miss Gertie Smith received the guests. Mrs. James Eadie of Oakland and Mrs. Hogg of Scotland presided at the dining room table and served tea and ice cream. Miss Hope Eadie, Miss Mabel Cunningham, Miss Eliza Patterson and Miss Clara Taylor were charming assistants and Miss MeCurdy presided at the piano. Note - This sounds like a very well run tea. Before World War I and in the 1920s there was considerable formality among ladies. Ladies had At home" days (Mothers At Home" day was Tirst Frklaysl Calling cards were left when calls were made and there was always a littte tray for them in the halt There was very little dropping in as we know it.

Burford - On "fijesday HG. Hanmer held a Sheep sate where 200 head were sold. He hopes to make this an annual event. The catalogues that were printed by the Advance" received many favourable comments.

Burford - The extreme cold has once again put the RR station heating out of business. Those using the station should take a hot brick with them and charge it to the G.T.R. Burford - January has been a busy month in Burford. There have been two balls for the elite, bridge parties, sleigh parties and surprise parties. There have been two weeks of special evangelistic meetings in the Baptist church, the annual meeting of the Congregational church and a banquet in the Court House (Masonic bJdg.) by Holy Trinity church young ladies. Our village is not asleep by any means) Mt. Zion - How about a mail route for the 8th concession. It is hard to drive three mites for your mail in this weather.

Jan. 27th, 1879 Burford - Several teams have started cutting ice at the mill pond north of the village. This has been a good season due to the cold weather and we should have lots of good ice next summer. Note the cutting continued until the 1920s and sleighs were a common sight bearing large loads of ice, some over one and a half feet thick. Before the advent of etectric refrigeration most stores and all meat markets had ice houses where ice was stored in saw dust or chopped cork. A few private homes had ice houses, but most people with perishable food just put it in the basement and hoped for the best. I recall that it was a real treat on a hot summers day to be allowed to go into a ice house and get a little chunk of ice. We used to suck it unmindful of the fact that it was just frozen creek water. Of course in those days the creek was not polluted. The mill pond was one mite north of Burford.

been reported to the Magistrate and the parties will be

prosecuted. It is sad to think of the homes disgraced by the drunkard.

Scotland - The young people are preparing a play to be given for the benefit of the Library which is now out of debt. The Board has purchased for $125 the tot on which the building stands, have moved the building, made a cement cellar and foundation as well as a walk. Everything has been painted and a number of new books have been bought.

Burford - Mr. D. Bradshaw has purchased the old planing mill and will turn it into a farm implement business with a splendid showroom. Note - This was a three story building on the site of the bowling altey. The business had gone bankrupt. This building was destroyed in the 1920s after an explosion. It was then being used as a garage. It stood right up tight to the sidewalk and was a hang out for many loungers and card players. It was frame construction covered with metal sheeting. 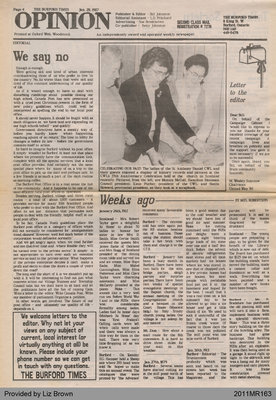