Coronation Day In Burford: There was no official celebration. The Bowling club entertained two rinks from Mt. Pleasant. The rink of Henry Cox finished with a 23-23 tie and A Collins' rink had an 18-18 tie. The new grandstand was much appreciated. The Boy Scouts entertained themselves at Mrs J. Lloyd-Jones by burning a large pile of brush. They had sandwiches, cake and lemonade and enjoyed pillow fights and cock-fighting. There was also boxing with Masters Tommay and Johnny Lloyd-Jones and Scouts Dick Saunders and Cecil Gorry. The Scoutmaster George Pite challenged Patrol Leader Jim Gorry to a three round match but was knocked out in two. (probably he faked it as a joke). The entertainmment ended with the singing of "God Save the King".

Mt. Vernon: The three year old son of Mr & Mrs Philip Newstead had a nasty accident. While playing the little fellow fell down and a wagon passed over him injuring him seriously but we're glad to know that Harold is recovering.

Burford: An experiment has been made in oiling the roads to lay dust from the corner to Geo Aulseybrook's house on Maple Ave South. If the smell is any criterion the oil will do the job.

Burford: The garden party on the Anglican church rectory lawn on Monday was very successful. The Brantford Salvation Army Band played. The party was in charge of the Girls' Guild.

The Ladies Aid of Cathcart intended holding a lawn party on June 24th on the grounds of Mr F Costain. The 2nd Regt Band has been engaged to play.

Harley: The baseball match on Sat between Scotland and Harley on the Harley grounds resulted in a victory for Scotland by 16 runs.

strawberry festival of the Methodist church was held on the beautiful grounds of David Perrin. The tea was excellent and the strawberries in abundance. The 2nd Regt Band, the choir and Prof Carpenter's violin provided music. Also Messrs Mid-dleton and Porter as well as Miss Mac-donald and others. Dr Johnston was chairman in his usual happy manner. Proceeds were $75.

Scotland: Mr Oscar Church is home from his trip and had quite benefitted from it. He calculated to pick 1200 quarts of strawberries from his grounds.

Mr J Keatchie and R.C. Muir have boulevarded their property recently which much improves them. It is hoped that others will follow suit. NOTE: Many did.

Burford: Wm Hearne and S.H. Stinson the Station master have left for England to attend the Colonial Exhibition. They will be gone three months. 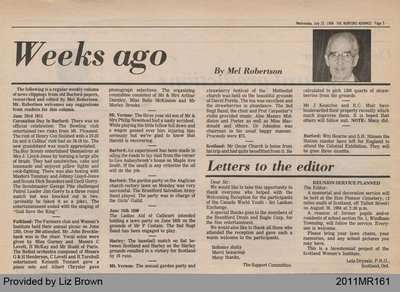