Vandecar: On Fri evening the pupils of Mr G.L. Sills assembled at his boarding House - Mr J Mighton's and after a few hours of basketball all entered the parlour where Miss Averill Meek read a suitable address and Master Hudson Camfield presented Mr Sills with a pair of ebony military brushes in a beautiful case...Mr Sills not only being an efficient teacher will be missed as a musician. He expects to leave soon for Alberta.

Burford: Great Day in Burford History -Last Monday the new industry the Canning Factory had its coronation when the great 60 ft smoke stack was raised into place. On Tues the boilers were fired up and all the machinery given a test under the supervision of Mr. Danheiser. On Wed the first load of peas arrived and was processed

and canned. Twenty-five hands arrived to help and were joined by a number of local boys. The building contractor Mr Faulkner is to be congratulated. NOTE: The buildings still stand although some parts have been demolished. The help referred to were Italian laborers from Buffalo who were housed in the "Help House" or old canning factory. They were, unfortunately, not well received by local people as they were accused of making home-brew. The late Bud McCraken who lived in Burford at the time, told me of one incident when a gang of local men attacked the workers at the "Help House". Some of the women defended themselves with stilettos and Bud showed me one that had been used. The late Aileen Danheiser gave me considerable information about the problems her father encountered with the imported help and the local men.

Burford: One of the most delightful garden parties of the summer was given by the Congregational church on the beautiful grounds of Henry Cox (north of Sprawl's store). In the north part of the lawn tables were set up and loaded with eatables. In the south-west corner was a well-patronized booth. The verandah provided a platform for the Oakland Quartette and the Burford Citizens Band provided music. We are pleased that the crowd did not damage Mr Cox' beautiful flowers. NOTE: Since this house is largely intact, less the verandah, this garden party can be easily visualized. The house is also noted as the site of A.M. Bell's attempt to broadcast

Burford: J.H. Hathaway's new band book is out and is really one of the finest collection of sacred songs we have seen. NOTE: The Hathaway family who owned several mills in the area, are still active in Canada. The late Ted Hathaway was commissioner of Boy Scouts in B.C. and Norman Hathaway is a prominent business man in Toronto. They visited Burford

a few years ago in search of remains of Hathaway mills in Burford and Woodbury. I am indebted to them for a number of old pictures I had printed in "The Advance" a few years ago.

Mt. Vernon: The farewell party for the Rev R Hobbs was held at Geo Meadows on June 28th. There were 200 present. Dr Marquis took the chair. Mt Pleasant choir entertained and there were solos from Miss Miles and Mrs. J McWilliams. The Sprint-stead Choir assisted Geo Fowler. Speeches by W Chatterton, J Mott and W Nelles. NOTE: The Dr Marquis noted was probably the grandfather of the present doctor. 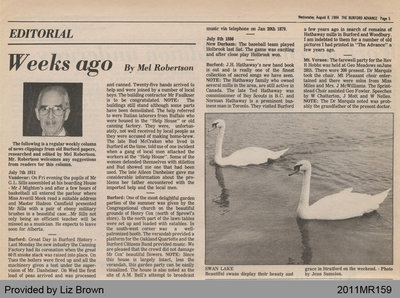