Burford: The great wind storm of Monday was responsible for much damage to crops and fruit but no buildings were blown down.

Burford: A Great Runaway - Our attention is drawn to a great deed of valour on Sat Morning when Geo Armstrong stopped a

fiery steed which was running away with F.A. Miller's democrat. The noble George when he saw the runaway ascertained that all the buttons of his overalls were fastened and entered the fray with a broom. He calmed the horse with his dulcst tones and used the broom as a signal to stop the horse. NOTE: Geo Armstrong was the local tinsmith and ice-cream parlor operator who owned the building where Greenwood's Meat market is located and the Burford Clinic behind it. Geo was also a local poet who used to entertain lodge meetings with his droll verse.

Mt. Vernon: The interior of the school has been overhauled and improved with new desks and a new floor and all painted infirst-class style. Work was done by Mr Thomas Douglas whose name ensures a good job.

Burford: The Methodist church here which has been undergoing extensive redecor-ation and repairs will reopen on Sun Aug 8th with the Revs William son of Norwich and Woodsworth of Brantford.

Mt. Vernon: The village cemetery is in bad shape with many stones overturned and broken. Something should be done to fix things up.

Woodbury: Mr Geo Tune is to build north of the church on Princeton street. Mr Henry Force is erecting a beautiful new houe. Mr Dan Davis is building a new barn as is Mr Lowden.

Burford: The Burford Boys Band Concert promises to be one of the best. Several bands will attend. NOTE: This was a Promenade concert at the Public School grounds on Maple Ave North.

Burford: About 2 a.m. on Thurs a young man came to the Barnea Hotel and wakened the prop. Henry Rice and wanted whiskey. When he could not get it he threw a rock through one of the windows on the east side. Mr. Rice intends to have the "Posey" punished.

Mt. Zion: the celebrated swindler also known as the agent for "Picturesque Canada" was in town the other day and obtained $21.60 each from 6 victims. NOTE: This was a famous swindle of the day whereby the agent pretended that the buyer would obtain the whole book for one price. However the book was issued in separate chapters each of which cost the price quoted. ;When one local farmer refused to pay for all the issues he had signed for, a collector was sent. The fanner demanded that the collector show him the paper he had signed. When he got it he put it in his mouth and began to swallow it. The agent tried to get it from him but another man intervened and in the ensuing fight the paper was destroyed. I have a full issue of "Picturesque Canada" which is an interesting publication. It contains many Barlett prints that are quite valuable now. The book was issued in 21 sections at .60 cents each but agents wre getting people to sign contracts for $21.60.1 guess one of my forebearers got hooked. I'm glad they did as the book is now worth much more. 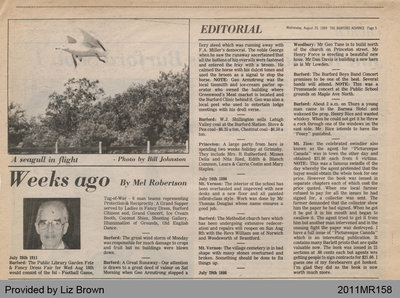