Wieks ago " Church sheds were once of great use

FaMeld - Mr. Chas. Stickles has completed the new enclosed church sheds which will be the best anywhere. All members of the church especially the ladies, are to be congratulated for their fund-raising efforts. Note - Enclosed church sheds were not common but they were of great use other than for horses and rigs. They were the site of fowl suppers in the fall and were used for garden parties when there were unexpected rain storms. The Bethel enclosed church shed still exists and is used as a skating rink when the weather is suitable.

Bishopsgate - On Friday afternoon at 5 p.m. Mr. Jas. Shellington s house burned with all its contents. Mr. Shellington, who was alone at the time, was

Ereparing supper when he has to go outside. While he was away the house caught fire from the stove in the kitchen.

Burford - The Fair Board is offering a three months scholarship worth $30 to the Toronto Business College for the first prize winner in penmanship. Note - People used to take great pride in their penmanship (Should I say Tenpersonship" in 1987?). Writing was taught in public school and "copperplate" writing was much in vogue. Some of this writing was so fancy that it

tired the eyes to read it. Burford - On Tuesday

p.m. an owl flew into Dr. Rutherford's kitchen. It was caught and killed by the gallant doctor. It measured two feet from wing tip to wing tip.

Burford - Editorial -There are two kinds of girls - those who work and those who gad about. Commend me to the former. Work lends dignity to a pretty girl. The gal who works, God bless her, combines the useful with the ornamental. She may gad about, roll on sofas (the editor's exact words) and read books but she prefers to be of some account as a steno, teacher, saleslady or housekeeper making her own way. Note - I can find_ no reason for this editorial but in 1910 women had few positions open for them in the work force and were expected to fill traditional roles, this editorial may have been prompted by the Penman Co.'s inability to get Burford women to work in their proposed Burford factory.

Burford - Numerous cases of petty theft have taken place in Burford lately. The persons are being watched and will get into trouble if they keep stealing other people's property. Note - By Sept. 30 the editor had changed his attitude toward local vandalism.

Burford - Mr. J. Lloyd-Jones made a large shipment of sheep and ponies to the Toronto Show. He was accompanied by his wife and sciences Johnny and Tommy.

Scotland - The Rev. Edwin Hobbs who has been pastor of the Congregational church for the past seven years is leaving the ministry. On Tuesday, Aug. 25 members of the congregational church met at his home and presented him with a purse containing five 10-dollar gold pieces. Mr. Hobbs will be making his home east of Scotland for a time. Note -Purses of gold and gold-headed umbrellas were favourite going-away gifts at the time. Fifty dollars may seem small in 1987 but in 1913 you could furnish a house for about $50 as some of the local furniture ads could attest. 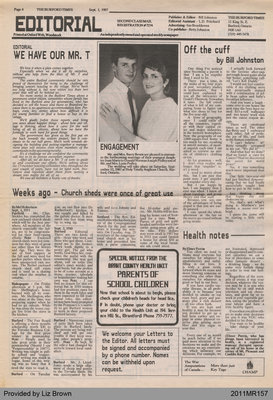