Sept Z 1910 Burford - Editorial There are two kinds of girls - those who work and those who gad about. Commend me to the former. Work lends dignity to a pretty girl. The gal who works, God Bless Tier, combines the useful with the ornamental. She may gad about, roll on sofas (the editor's exact words) and read books but she prefers to be of some account as a steno, teacher, saleslady or housekeeper making her own way. Note - I can find no reason for this editorial but in 1910 women had few positions open for them in the work force and were expected to fill traditional roles. This editorial may have been prompted by the Penman Co.'s inability to get Burford women to work in their proposed Burford factory.

Burford - Numerous cases of petty theft have taken place in Burford lately. The persons are being watched and will get into trouble if they keep stealing other people's property. Note - By Sept. 30 the editor had changed his attitude toward local vandalism.

Burford - Mr. J. Lloyd-Jones made a large shipment of sheep and ponies to the Toronto Show. He was accompanied by his wife and sons Johnny and Tommy.

Fairfield - On Wednesday afternoon Mr. Melvin Smith lost his barn, most of his farm implements and 17 hogs when his barn burned. Since Mr. Smith lost all his crops this was a serious fire.

Cathcart - The Woodstock "Sentinel Review" praised Mr. G.W. Elliot's display at the Fair. It consisted of two stalls full of every kind of flowers, fruits and vegetables.

SepL 11,1913 Cathcart - Mr. Elliot is very busy with his truck taking people to the London fair. Note - There were very few motor busses in 1913 and trucks with wooden benches were used to transport people to fairs, picnics, etc. Some went quite long distances and the hard wooden benches were not comfortable. However, people using these trucks usually passed the time with sing-songs, etc. 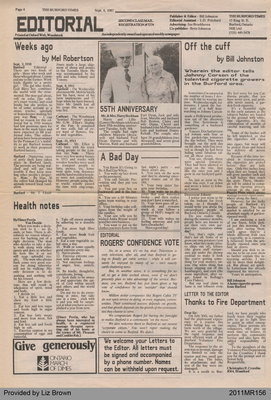