Burford: The only complaint about pickpockets at Burford Fair this year was from Mr. Henderson of Waterford who fell in with a crowd of fellows at the Fair and was relieved of his pocket-book containing $22. Henderson went to Mt. Pleasant where he borrowed sufficient money from his uncle to get home. (Info thanks to Syd Sayer). Burford: Some of the winners at the Fair were: Special fancy drill for girls: Burford Public School trained by Wm. R. Smiley, Teacher. Special boys & girls under 14 for grain in straw: Morden Smith, R. Porter, E. Disher, W. Wingrove. Special by S. Brant Women's Institute collection of six or more quarts of fruit any kind: Cathcart, Mt. Vernon. Brood Mare with foal at foot: A. Mclntyre, A. Secord. Firkin of Butter not less than 15 Ibs.: Jas Barker, H.P. Disher. Foal of 1913: Hy Mordue, C.W. Gurney, Peter Porter. Orange Marmalade: Lottie Bridger, Mrs. John Charles.

Burford Fair: Burford Show of 1911 was described by a Toronto man as "one of the best managed fairs in Ontario". President Hanmer and Secretary Miles are to be congratulated. Over 7000 attended and all the streets of Burford were full of rigs and horses were put up in every available space. The Dufferin Rifles Band was present and a Fancy Drill team of 16 girls put on a display. Tents and booths dotted the whole ground and a "Quick Lunch" tent operated by the Girls' Guild of the Anglican church did a roaring business with food from 5 cents upward. Hamilton's displayof harness was outstanding and the concert put on by the MacDonald Concert Party in the Barnea Hall drew many encores.

Last week a man driving along the road north of Burford at a late hour saw flames on the roof of Mr. James Hearne on the 6th Concession. He wakened the family and after a battle the fire was put out. Again on Tues after Mr. Hearne had retired he heard flames crackling and found his house on fire and a man running over the field but since he was lame he could not pursue him. Mr. Hearn has no enemies and is a quiet man. He cannot explain this.

Burford: On Thurs. last the Burford football team battled Mt. Vernon to a one-all tie. When time was called Burford had the ball near the Mt. Vernon goal and could have won.

Mt. Vernon: On Tues. aft. our village was a battle ground. Master Henry Wonch and Dr. Tune were locked in deadly combat over some matter, hugging each other in great style. Neither was killed.

Etonia: Mr. H. Kennedy was 1st prize for his yearling roadster colt at the Guelph Provicial Exhibition. There is no equal in Ontario for speed and beauty.

Mr. P. O'Neil of the 10th Concession gave us a branch with a winter apple and a bunch of blossoms. He says his tree has apples on one side and blossoms on the other.

Burford: A runaway occurred at the RR station on Tues. as Mr. Ed Shellington was lading coal. The horses ran away braking a wagon tongue and ruining the harness. One was captured uptown and the other in the backyard of Muir's elevator.

Burford: Master Leslie Miller unfortunately shot himself in the foot while hunting with some other boys recently and will be laid up for some tune. Leslie is the son of Mr. and Mrs. F.A. Miller.

Burford: Over 8000 attended the Fair. In the evening a concert in the Barnea Hall was put on by the Rich Entertainment Co. of Toronto. The Fair was one of the best in recent years. The Pres. W.K. Muir and Secty. W.F. Miles are to be congratulated. The rural schools exhibition under Mr. R. Schuyler was excellent.

Salem: The 50th anniversary services of the Salem Methodist church were held on Oct. 5th and 6th with the Rev. Jacob Bloodsworth as the guest preacher. Mr. Bloodsworth's father was an active member of the church and was killed when it was being built. In the evening the Rev. Wray Smith of Merriton preached and on Mon night the ladies put on a Fowl supper and concert. Miss Lillian Mott, Mrs. T.D. Rutherford and the Bethel Male Quartette provided the program. Over $100 was taken in. The singing of the Salem choir was excellent and many telegrams from old Salem residents were read. 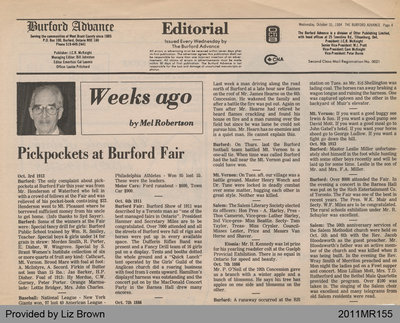