Sept 30,1910 Burford - Why is Penman's having trouble getting girls to work in the new ^n^^^^^^^^^^^rS MuJttTCii^^^^ their bicycles to get to work so they can be independent. Note - The factory was not yet operating and there was a lack ot interest in girls working there due to the uncertainty of the work and the type of work offered.

Burford - On Thursday aft four boys who had assaulted Jim Burton on the night of Sept. 24th and cut his hand badly were tried in court. One boy was fined and the others let off ... The Editor thought the action was "a storm in a teapot." Note - The editor who had deplored theft and rowdyism three weeks before, sneered at the court action as unnecessary. In 1910 it was considered "manly" to fight and brawl in the streets and only the chicken-hearted ever took anyone to court. Even in the late 1920s, when I was a child, I witnessed a big fist fight between adult brothers on the site of the Toronto-Dominion bank and a horse-whipping of a boy in front of the Harbot-tle block east of the post office. There were other similar incidents.

Princeton - The Bishop of the Yukon preached at the Anglican Church on Sunday. He is the guest of his sister Mrs. (Rev.) Whelan.

Sept 13,1880 Burford - A local girl age 13 was charged with stealing $4 from Reginald Grey. She admitted the charge and was given two years in the Girls Refuge in Toronto. Note - What would she have gotten today? 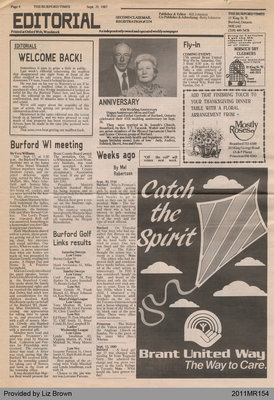