BURFORD: The Machine Telephone Company has petitioned Council for permission to install poles on Township roads for the purpose of operating a telephone company. NOTE: At one time both Bell and the Machine Phone Co. operated switchboards in Burford and there was considerable competition.

BURFORD: Geo. Aulseybrook is getting his apple evaporator ready for operation. The Aulseybrook brothers intend to process more fruit than before. They are paying .40 cents per 100 Ibs. of Peeling apples. NOTE: The Apple Evaporator which was located on Maple Ave. South of the RR tracks was famous for its "Apple Butter."

BURFORD: Farmers are warned about a man going around pretending to examine cattle for hoof and mouth disease. On no account should anyone pay him for anything.

Mrs. Elizabeth Muir celebrated her 90th birthday on Sunday, July 28. A resident of Brucefield Manor in Mt. Pleasant, Mrs. Muir has many friends and relatives living in the Burford area.

Four generations of family attended her birthday party which was held at the nursing home between two and 2:30 p.m. A large cake was served and several members of the nursing home administration were also present. 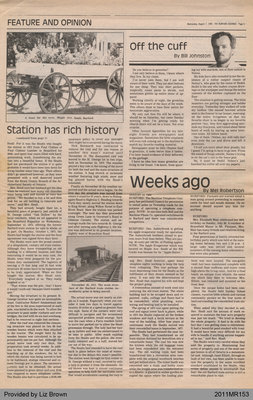