The following is a regular weekly column of news clippings from old Burford papers, researched and edited by Mel Robertson. Mr. Robertson welcomes any suggestions from readers for this column. June 9th 1911

Cathcart: One day last week Bob Thomas was returning home with his wagon when a car turned into the road too quickly and for c ed his team into a pole. The rig was damaged and many dozen eggs broken. Bob escaped injury. Note: Bob Thomas was well known as an auctioneer ;inci the owner and driver of trotting race horses.

Mr. J.H. Hathaway is home finishing compiling music for his new Gospel Song Book which he says will be out this month. Note: the Hathaway family owned the mill one mile north of Burford as well as mills in other parts of Ontario. J.H. Hathaway was one of the most prominent Gospel singers of the age. He travelled with many of the leading evangelists. Miss Minnie Fowler of Burford wrote the music for the Hymns Hathaway composed.

Fairfield: The return match between the Athletes of Fairfield and the Fir Grove team of Butcher's settlement was played on Sat on F.A. Metcalf's farm. The Fir Grove team won being 38 runs ahead after 7 innings. Note: The Metcalf farm is now owned by Mr. Russel Wilson. The Dutcher's Settlement was along the 9th Concession so the team did not have far to

Mt. Zion: Geo Muir killed a snake the other day. It was 5 ft. long. Note: Large water snakes and "puff-Adders" were not uncommon in this area in 1886. My grandmother used to tell of men killing snakes that when hung over a stick held at arms length along the side touched the ground with both ends.

Burford: Mr. Gable of the Commercial Hotel was shooting rats the other day when the pistol backfired and struck him in the eye. He is trying to figure out which end of the pistol was loaded. 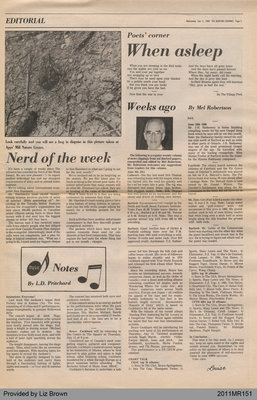