The following is a regular weekly column of news clippings from old Burford papers, researched and edited by Mel Robertson. Mr. Robertson welcomes any suggestions from readers for this column. June 17th 1886

Harley: At 10:30 a.m. fire was discovered on the roof of the cheese factory. A large crowd assembled and when they saw that they could not save the building they took 9 tons of cheese from the dry house. The boiler exploded with considerable force throwing fragments across the road. The bldg was ensured with Globe Mutual for $800.

Fairfield: Mr Wm Eraser has thrown open the grounds of his beautiful place 2 miles south of Burford for a lawn party on Fri June 18th in aid of the Baptist Church.

Mt. Vernon: On Tues last an English lad was drowned in the creek. He had been in the employ of Robt Lloyd-Jones and was bathing with Mr Lloyd-Jones' son when he got beyond his depth.

Cathcart: The Anglican Church intends to enlarge their church to accommodate everyone since Rev Mr Wade came to preach.

Hatchley: A number from this place attended the Necktie Social at Kelvin last week. We wonder if the girls there got as badly mashed on our boys as they did on the Fairfield dudes.

Editorial: Are there any Sportsmen in Burford? This town needs the following: A Public Park, A Public Hall, A Good Public Library, A Football Team, A Hockey Team and a Social Club. On May 24th the organizers of the Sports Day are going to give cash prizes. Cash prizes are not condusive to good sportsmanship. They also jeopardize the receiver's amateur standing.

Burford: A one mile race open to all schools in Burford Township will be held on May 24th. Each school is allowed two runners who must be able to produce a certificate from his teacher showing that he is a bonefide pupil of the school he represents. This is an annual race and the beautiful shield is now held by School Section No 24.

Hatchley: Mr. Blake Pierce was taking his milk to the factory on Friday when his horse got frightened and threw him from the wagon He had a narrow escape from being killed but is now around and about.

Cathcart: A number of Bell Telephone subscribers are having their phones taken out as the rates are much higher than the competition. 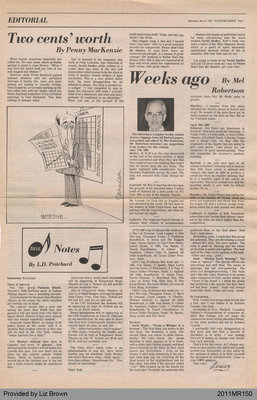