The following is a regular weekly column of news clippings from old Burford papers, researched and edited by Mel Robertson. Mr. Robertson welcomes any suggestions from readers for this column. June 17th 1886

Harley: at 10:30 a.m. fire was discovered on the roof of the cheese factory. A large crowd assembled and when they saw that they could not save the building, they took 9 tons of cheese from the dry house. The boiler exploded with considerable force throwing fragments across the road. The bldg was ensured with Globe Mutual for $800.

Fairfield: Mr. Wm Eraser has thrown open the grounds of his beautiful place 2 miles south of Burford for a lawn party of Fri June 18th in aid of the Baptist Church.

Mt. Vernon: On Tues last an English lad was drowned in the creek. He had been in the employ of Robt Lloyd-Jones and was bathing with Mr Lloyd-Jones' son when he got beyond his depth.

Cathcart: The Anglican Church intends to enlarge their church to accommodate everyone since Rev. Mr. Wade came to preach.

Hatchley: A number from this place attended the Necktie Social at Kelvin last week. We wonder if the girls there got as badly mashed on our boys as they did on the Fairfield dudes.

Burford - Editorial: "Owing to the furious riding of bicyclists on our sidewalks the Police Trustees have been forced to put in a By Law against it with heavy penalties ... The Police Trustees should also pass a By-Law limiting cars passing through town to a speed of 6 miles per hour. This is a safe speed and will not raise clouds of dust. Signs to this effect should be put up at all entrances to the village." NOTE: "Furious" riding of bicycles or "Scorching" as it was called, was a serious problem. At one time Dr Harbottle had every bicyclist in the village served with a summons. They paraded into court behind a local piper and were severely criticized by the judge. A subscription was taken up in the village to pay the fines and Dr Harbottle refused to sell anything from his drug store to anyone who subscribed. A local "sneak" used to strew tacks on the sidewalk in front of other people's homes hoping that they would be blamed by the cyclists.

Harley: We regret to report the death of Niles Rathbun age 72. Mr. Rathbun has been active in county affairs serving as Warden and Reeve. The service was conducted by the Rev G. Lounds of Burford and the Rev Mr. Clark of Kelvin. It was one of the largest ever seen.

Burford: Sixteen English girls arrived on Mon and were placed immediately by Mr. D.G. Hanmer who deserves credit for his kindness. NOTE: These girls were employed in Burford as either "Maids" or "Hired girls" depending on the social aspirations of their employers. They received the going wage of about $5 a month plus board. At this rate many people in Burford and district employed "House help" without feeling that they were being "high Falutin". Many of the girls married local young men and founded well-known families.

Burford: The Machine Telephone Co. is installing another trunk line to Brantford. This should do away with the often-heard "The Brantford line is Busy."

Burford: On July 4th RR2 will be started from Burford to Fairfield Plains and Bishopsgate and the Townline. Geo Pite will be in charge of mail delivery. 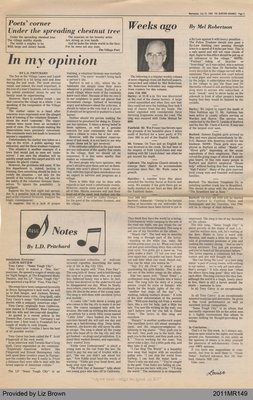