Weeks ago By Mel Robertson

Tansley: Mr Squires and his Bell Ringers were to give a concert at the school but failed to turn up. A large crowd had gathered and were disappointed. It is understood that some of the young gentlemen took the wrong direction on the way home and got lost.

Burford: The Children's Aid of Brantford is holding a field day in Burford on Sunday June 4th with special services in all churches. Services are also being conducted by Children's Aid people at Fair-field, Paris Plains and Bishopsgate.

Burford: The new Canning Factory is about ready. Two boilers of 125 horse-" pWver have been installed and a smoke stack 5 ft across. A storage building is being put up east of the factory and from 75 to 100 people will be employed. Canning of peas will start on July 12th. Note: Almost every Burford kid worked at the factory in the summer at .25 cents an hour.

Burford: The Police Trustees have called for tenders for 3000 ft of concrete sidewalk.

Burford: The Dragoons will leave Mon for Niagara Camp at 7:30 a.m. from the GTR station. Lt C.E. Stuart is in charge of loading the horses. No bits are to be worn and all horses must be clipped and

hands high. Dress is to be red frock coat, blue pantaloons, leggings and forage cap Each man is to bring his own lunch. Orderly officers is Lt D.W. Secord. Baggage Master is Sgt Gillman. Officer in charge of baggage loading Lt W.T. Hearne assisted by Sgt. Cavin. Tent erection Lt J.E. Lattimer. Sentries are to be placed at all coach doors and no one will be allowed to leave the coaches without written permission Adjutant- Lt C.E. Stuart. C.O. Major W.K. Muir. Note: The departure of the local dragoons each year was the highlight of the summer. Everyone up and down the RR line turned out to see them go. Going to Niagara Camp in 1911 was like going to war overseas and the departure of the troops took on a sentimental touch. The local band usually added to the sadness by playing "Nearer My God to Thee" and patriotic tunes.

Mrs. J.W. McWilliams and her little son Willie left for Penatanguishine on Wed where Mr McWilliams has obtained a job as a guard at the in the Reformatory for Boys.

Hatchley: A young man residing north of the village has been making very severe threats against our merchants but he was cunning enough to be a good distance away. We warn him that "A word to the wise is sufficient" and he may be called upon to display his boasted skill in pugilism.

Mt. Zioii: Last Fri the village was visited by a violent storm with hail stones measuring inches in diameter. However no severe damage was done.

Mt. Zion: We have just learned that 20 sheep were killed by dogs on the road to Cathcart recently. We think this is a good argument for the Stock-Act.

Mt, Zion: A young man was heard to say recently the Mt. Zion was the liveliest place he had ever visited when compared to Cathcart, New Durham, Hatchley and Fairfield. 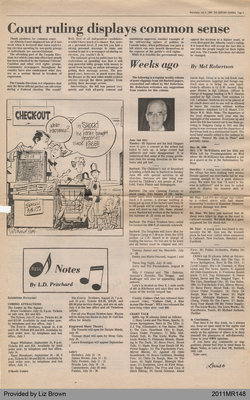