Hariey - The home of Mr. U Mrs. John Brown was the scene of a party on Jan. 31st when 45 children and grand children assembled to celebrate their 45th wedding anniversary. An oyster supper was held and a jolly time was indulged in. Many useful presents were given.

Ml. Vernon - Mr. A. Youmans will have his new store in operation on Feb. 8th. New goods at living prices!' "No order too small." "No trouble to show goods." Give him a call.

Fairfield - The Ladies Aid held a very successful tea at the home of Mr. Gowdy on Wednesday evening. Over KX) attended. There were selections by the choir, recitations by Miss Lena Malcolm, instrumental music by Velma Rutherford and Lena Gowdy and minute speeches by a number of gentlemen. The tea lasted until U octock. The Rev. Mr. Sabine was the chairman. Note - This sounds like a very enjoyable evening. In the days: when many houses had double parlours it was easy to handle such large crowds.

Burford - Editorial Burfbrd needs a football team. Tennis is all right in its way and bowling is good for older people but Burfbrd needs some excitement. The team, will need a good committee and could play games at the Fair Grounds. Note-Almost every village, hamlet or corners in Burford Township had a soccer team in 1912 and there are reports of really rough games and several deaths dues to "Furious kicks" sometimes delivered to settle old scores.

Burford - Young Stewart Amy had a narrow escape last week. He was helping move Archie Litchfields house over the fields to strike the road north of Bishopsgate. He fell on this ice and pulled the horses around as he fell. Several men fell under the horses but Stewart only received z cut knee. 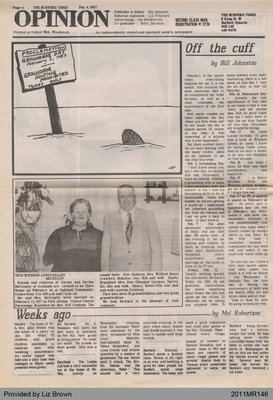