BY MEL ROBERTSON Feb. 26th, 1914 Burford - Hydro Nut Cracked! A petition signed by 25 property owners has asked the Police Trustees to take action to get Hydro in the village. You are asked to vote on the enabling Bylaw on March 9th. Vote for Hydro and Boom Burford!

Burford - There were many beautiful dresses at the military Ball last Thursday. Guests were there from Gait, Brantford, Paris, Princeton and Toronto. Many new dances were tried out, much to the amusement of the sitters." Mrs. A.D. Muir looked well in a dress of peacock blue with shadow lace and ermine trimmings. Mrs. J. Brethour wore black satin with a net overdress and trimmings of yellow brocade and jet. Mrs. Martin of Princeton wotx ,,idck silk with shadow lace and jet with bunches of old rose. Mrs. Goldie looked very

handsome in yellow satin veiled in blue chiffon with touches of American Beauty crimson. Mrs. M.F. Muir wore cream satin with military red and sable trimmings. Note - Ball gowns were extremely elaborate in 1914 and were really not designed for the rather boisterous dances such as The Lancers", the various Two-steps and The Dashing; White Sergeant. They were, however, very attractive in the waltzes which were thought to be slightly improper due to the close contact they required. 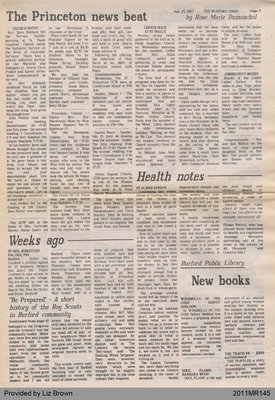