March 3rd, 1911 Barley - Mr. & Mrs. Harding wish to thank everyone who have helped them restore their home which was destroyed by fire. Mr. -Harding had insurance and will start building again soon. Note - It may seem strange in 1986 for a newspaper to mention that a person had insurance but this was common in 1913 when many people did not have insurance on their buildings. C.F. Saunders the Insurance agent and also Fred Sturgis who installed lightning rods always put items in the Advance1 when there was a fire or lightning damage pointing out the value of buying insurance or having lightning rods installed.

Burford - Only 70 acres of peas is needed for the new Canning Factory to get started. So far the following acreage has been obtained Tomatoes - 5.5 acres, Corn 60 acres, Peas - 36 acres, and an undetermined number of acres of beans. A large number gathered in the Barnea Hall to hear the promoters of the factory explain what was needed.

Note The Canning factory operated for several years near the old RR station. It was bought out by one of the larger canning companies and was closed. It provided work for many Burford children at about 15 cents an hour. The label Burford Brand could still be found on shelves of stores long after the factory closed.

Burford - The Brant County Fruit Growers held a meeting in Rutherfords hall on Feb. 21st. Col. J.Z. Fraser was chairman. Vice was J.H. Wooley, secretary & manager William Dickie. Membership is 30 and acreage 4,000 growing trees. Note - Apples were a big export in Burford in 1911. Mr. Giles Fowler was one of the foremost. Sometimes so many barrels were awaiting shipment that passengers: could not get on the RR station platform.

Hatchley Hatchley hunters: this winter have captured more than 50 skunks. Last week they found a nest of five skunks which were living with a five foot black snake. 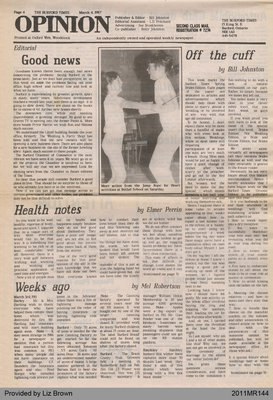