Council has bought out the water privileges of Mr. McCracken north of the village in order to build a new bridge. At present there are 3 bridges two turning north and one west. Council proposes to build one bridge and will change the course of the creek. Note - This was one mile north of Burford on Maple Ave. In 191-1' the creek divided into two courses and there were two wooden bridges on the north road. The marshy ponds on the west side of the road are the old courses. These were called "The Dead Ponds" in the 1920s and 30s and were favourite skating places. Crowds would walk down in the evenings and skate by moonlight.

Burford - The Annual Ball for the officers of the 25th Dragoons will be held in the Armoury on Feb. 19th. The Original London Harpers Cortese Orchestra will play. Note A Cortese orchestra dressed in Spanish costume for some reason or other. I doubt if in 1914 many Burford people danced the tango or the fandango.

Cathcart A concert will be held in the Foresters' hall on Tuesday, Feb. 17th for the Sidewalk Fund. Admission 25 cents.

Hampshire Penitentiary. Note - The Rev. C Byrne Sr owned and operated a dairy farm south of Burford while he was pastor of the Burford church. The Rev. C Byrne Jr. was a Capt. in the local militia and a crack marksman who took part in many shooting contests with my uncle Mel Woodin and Joe Hunter.

Feb. 13th. 1880 Harley - We are glad to see that the Harley House has changed hands and that Mr. Dutty has taken over. He will see the bar is closed early on Saturday nights so there

will be no more drunken exhibitions on the Sabbath. Note - In the time mentioned Harley had a reputation as a real swinging place. The term going to Harley on a bum" was a common expression. 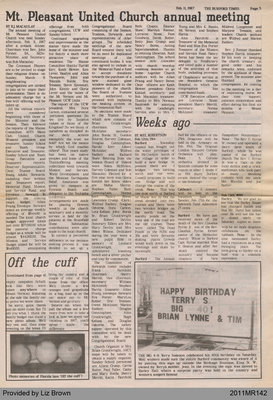