Burford - Mr. P.M. Lewis has sold ,a batch of fine young fat cattle to Bill Creighton. These are prime animals and will make good eating. Book your order now.

Burford On Saturday last Mr. D.G. Hanmer got entangled with his horse and ng at the corner of Queen and Colborne in Brantford. Three other rigs were involved and it took all the ingenuity of the Brantford police to solve the tangle. Note -In view of the slum-area mess that has been created on Colborne Street since the Eaton Centre was built it would be easy to get into a similar tangle in 1988. D.G. Hanmer was one of the Burford area's most prominent agriculturists and stock-breeders. He was known all over Ontario and the USA.

Bwrford - On Tuesday Burford played the Brantford Beavers at die local rink. With the score 5-3 for Burford, spectators stopped play by; invading the ice xin battling with one of the Brantford players whose rough play was being ignored by the referee. The game was stopped and Brantford was awarded five goals. Cavin in goal and Farrell and Dutcher were the three stars. On Wednesday Bur-ford beat Scotland 9-3. Note - Heavy-handed action by spectators seems to have been the regular thing at Burford hockey games in the early 1900s as there are other reports of a similar nature. Sometimes offending players were thrown out 01 the rink, skates and all. However, in the 1920s when I was a child and games were played on the rink behind the 1851 building, I cannot remember any fights on, or off, the ice.

Borford - A rest room for fanners' wives is needed in Burford so that they can rest and read newspapers while their hatbands are delivering grain to the elevators. 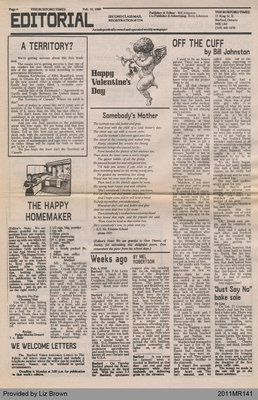