Creator
Robertson, Mel, Author
Media Type
Text
Item Type
Articles
Description
From the 1970s through the 1980s, Mel Robertson wrote many articles for the Burford Advance and Burford Times on the history of Burford Township. This clipping contains the article The Christmas Stocking. It describes the local folklore and customs surrounding the Christmas Stocking. The article may not have been republished.

FOR THE PAST 40 YEARS I have tried to publish a Christmas-oriented story in "The Times" or "The Advance". These have always been about the folklore aspects surrounding local Christmas activities and not the theological aspects of the season. My stories have been based on my own recollections, the recollections of friends, old newspapers, old diaries, old letters and old postcards.

I am, of course, well aware of the religious aspects of December 25 as the birthday of the Blessed Child Jesus but I am also aware that December 25 is not the historical date of the Blessed Event. No such date exists but rather it was a date chosen by Pope Gregory in the year 354. In this he was following the church's policy of absorbing, rather than suppressing, pagan festivals. The pagan festival closest to our celebration of Christmas was the Roman Festival of Saturnalis on December 17 - an ancient celebration that involved eating, drinking and merrymaking.

Since the first declaration of December 25 as Christmas Day, theological observations have changed from time to time but remain essentially the same. These have been discussed in a very interesting and well presented manner by local theologians in the columns of

"The Times" and "The Advance". As a layman I will say that I understand and appreciate the religious aspects of Christmas but will continue to follow my observations of local folklore and customs which, from the many telephone calls, conversations and notes I have received over the years, seems to be enjoyed by a considerable number of readers.

In facing the coming of this year's Christmas I was confronted with the fact that, after 40 years, I was running short of topics. However, when I mentioned this to a reader, she said, "You have never written about Christmas stockings, their history, their local use, their contents, where and how they were hung, etc." This presented a challenge and I will try to meet it. As this will probably be my last Christmas story, I hope it will fill the vacancy my friend suggested.

I don't know where the custom of hanging up Christmas stockings began but, in her excellent "The Little Book of Christmas", Jennifer Mulherin claims that it began in Northern Europe centuries ago and had both Christian and pagan aspects. The Christian part suggests that, on Christmas Eve, Saint Nicholas threw some gold coins down a chimney as a charitable jesture. These fell in some stockings that were hanging up to dry. There is also an ancient pagan-Christian belief that, if a young lady placed her shoes before the fireplace, crossed one on the other, she will meet the man she is to marry on Christmas Day. There are other old customs involving fireplaces that I will describe later in this article.

In early Burford the first step toward Christmas and the Christmas stocking was taken by children when the first frost appeared in the fall. Then they began their yearly journey down the magic road that led to the mystery of Christmas Eve and the joy of Christmas Day.

This first step was the beginning of thought as to what they would like as a major present. This was not a simple decision in the 1920s for most stores did not display toys during the year and companies did not begin to send magazines of Christmas gift suggestions in August. Therefore, children had to depend on playground gossip, their own imagination and a source of information that was rarely discussed.

In the 1920s few houses had indoor plumbing but relied on vine-covered "backhouses". It was also a time when toilet paper was not in general use. Instead, outdated copies of Eatons and Simpsons catalogues filled the essential purpose. Often by fall this catalogue would be last year's "Fall & Winter" edition with illustrations of Christmas gifts and toys. Consequently, during moments of intestinal contemplation, children could get gift ideas from things that were displayed.

That led to the next step when, on some afternoon or evening, Mother or a live-in "Aunt" would say, "When are you going to write your letter to Santa Claus?"

A letter to Santa Claus was usually written on a small piece of paper that the child had decorated with Christmas symbols. A list of requests was included and the letter was addressed to "Santa Claus - North Pole", an address that "The Little Book of Christmas" says was Scandinavian in background. Then Mother or the "Aunt" would suggest that the letter be put in a special place or, if there was a fireplace, that it be burned. Burning a letter on Christmas Eve is an old European custom whereby it was said that the request in the letter would be granted by some mythical person.

After the letter to Santa Claus had been posted in one way or another, children moved on to the other stops on the road to Christmas which included the Sunday School Concert, the school concert, Christmas house parties and the afternoon of Christmas Eve parties that I have described before.

During this interval it may be of interest to describe what a child expected to receive in their Christmas stocking. They did not, of course, expect that their major gift would come in the stocking but nonetheless they expected certain edible "treats" that were not available at other times. These included various unshelled nuts, packages of Sultana raisins, candy canes and, above all, big "seedless" or navel oranges. Seeded oranges were available all year but they were small, not particularly sweet and had seeds that stuck in your teeth. Big seedless oranges were a wonderful "treat" in the 1920s and kids felt the big bulge in their Christmas stocking with joy and anticipation.

The name "navel" was rather puzzling as kids imagined it had something to do with the sea. However, our ignorance was solved one day when some smartass kid pulled up his sweater and, with his "navel orange", showed us that the spot on the end of the orange matched his "belly button" or navel. When we told our Mother she said it was a "naughty" way of "showing off. There was no further discussion and kids, as they ate the oranges, soon forgot the "belly button" connection.

The next step in the Christmas stocking story took place at about 4:00 p.m. on Christmas Eve when special Christmas Eve stockings were brought out. These were usually not stockings that were worn every day but long knitted things used only on Christmas Eve. They were fastened together by Mother and one of the "aunts" with many smiles and mysterious comments. If there was a fireplace they were hung there; if not, they were put on a table while the children prepared a lunch for Santa Claus based on what Mother thought that Santa would like. This was usually composed of a glass of milk and a couple of cookies which, while not a proper snack for an overworked spirit, always showed complete consumption the next morning and maybe a note of "thanks".

When all this was done, the children, who had been clamoring to go to bed for several hours, trotted off to bed where, as Clement Moore wrote, "Visions of sugarplums danced round their heads". Then, at about 4:00 a.m., they crawled to the foot of their beds and heard that never-to-be-forgotten rustle of the many things in the stockings.

In many homes I find that certain customs were preserved every year regarding Christmas stockings and their contents were placed and the presence of certain objects. In my childhood home it was traditional to put a little celluloid "noddler" in the toe of one stocking. A "noddler" was a little man or woman on a weighted base that "noddled" about when it was pushed. Sister Emilie and I always expected a "noddler" in our stockings. We cherished them, even though we knew that they would probably get squashed during the sometimes frantic activity of Christmas day. I still have the last "noddler" I received when I was about eight. It is in my collection of small antique toys. It is a little Japanese man with a cane who still "noddles" when pushed just as he did in the Christmas twilight so long ago.

So that is my Christmas stocking story - part pagan, part Christian which, while being based on much pagan folklore, contains aspects of our Christian faith in the love shown and the joy given in the greatest Gift of all.

One final note to the Christmas stories I have written for the past 40 years. Since I know that a considerable number of my readers are older people who remember Christmases of a different time and type, I would recommend Susan Hill's very interesting little book, "Lanterns Across the Snow". While written in England, this book recalls many of the happy Christmas times of different days and the love of imaginative parents.

Since this is my last Christmas story, may I wish all my readers a Merry Christmas and thank those kindly people who, over the years, have told me in one way or another that they liked my little efforts. 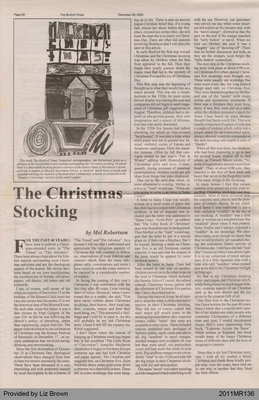