Creator
Robertson, Mel, Author
Media Type
Text
Item Type
Articles
Description
From the 1970s through the 1980s, Mel Robertson wrote many articles for the Burford Advance and Burford Times on the history of Burford Township. This clipping contains the article The Lights of "Dark November". It describes the history of illumination in Burford. The article may not have been republished.

The Lights of "Dark November"

ON MY recent I birthday I was [given a copy of David Beaty's Jght Perpetual" - a beautifully illustrated book about the use of stained glass as a' memorial to people, places and events. Peter and Barbara chose this as they recalled how much Shirley and I appreciated the beauty and skill in the use of stained glass, both in Canada and Europe. The title of the book comes from the religious words, "Grant unto them eternal rest, O Lord and may light perpetual shine upon them".

Having just come through what is known traditionally as "Dark November", it may be interesting to note how "light" of various kinds has affected people over the years.

The belief that November is a "dark" month is not accepted in the year 2000 but it was a belief that was held even into the early 1900s. One illustration of this belief appears in the 1915 edition of "Blackies Children's Annual" in which Elsie Bromfield wrote a children's poem about each month of the year. For November she wrote, "November's here so dark and chill. Fog and mist on vale and hill. We must carry lights by day. Or we cannot see the way."

Such a poem is laughable today when we can have instant brilliant "light" with the push of a button, the clap of a hand or the sound of a voice. However, in ancient times the production of "light" was a very difficult thing involving slow striking of flint and steel, the use of fire embers, etc. Life was a matter of "light" and "dark" and people began to consider that the word "light" was synonymous with "truth", "salvation", "happiness", etc., and for a person to have seen the "light" meant that they had achieved the best things of life for the present and the hereafter. Theologians over the centuries have

Little is known about the ability of the 9th century people who inhabited our plain to create quick "light", but we do know that they, and later aboriginals, had vast knowledge of things that could be used to create fairly quick lights and fires. These included various plants whose bark or leaves, when dried, could ignite quickly from the spark of a flint, long pieces of willow root which when dried could be ignited to provide a lingering spark that could produce a flame with a few puffs of breath, and oil from certain animals which, when properly prepared, could serve as the liquid for primitive stone lamps.

Many of our early settlers came from countries where there was a long history of providing "light". Some brought primitive lamps with them while others brought the skill necessary to prepare candles from tallow or other sources.

Lighting progressed through many changes until coal-oil became the common source of light and most homes had several oil lamps to brighten the darkness in the house and oil lanterns for use about the barn at night. Every store had an "oil house" which contained a large tank of coal-oil that was kept filled by a traveling tanker from Brantford. Customers brought cans varying in size from one gallon to five and, when these were filled, the storekeeper was expected to deliver the can and pour it at the customer's house without spilling a drop.

Most homes had elaborate hanging lamps in the parlor and dining room. These always had coloured shades and a row of glass bangles

around the base. They required considerable skill to be lit and extinguished. Children always stood around when one of these big lamps was extinguished for most emitted a big "pop" after they had been put out.

Lamps in public halls and churches were either on chains to be let up and down or on wall brackets. Some of these existed well into the electrical era and T recall at least one wall bracket lamp in the Methodist (now United) church well into the 1920s. Pulpits always had a couple of lamps for clergymen who read their sermons and there is one local report of a clergyman who became so "carried away" that he knocked over the pulpit lamp and set the church afire.

I recall my childhood bedroom lamp with pleasure for Mother or our "hired girl" Ruby always sat by it to read The Expositor's "Uncle Wiggly" stories every night. I also recall the moving light of barn lanterns as men went about their nightly barn work. Other people will recall an English woman who went about Burford at night with a lantern and a shepherd's crook doing charitable work.

Dark November also inspired certain Christmas gifts that brought out the "bragging rights" of 1920s little boys. One was the candle lantern, a small replica of the coal-oil lanterns used about the barn. These came in several sizes with the bigger ones being able to hold a larger candle and thus provide light for a longer time. Most boys of my time had a candle lantern and I can recall many candlelit trips to Burford after an evening's skate at the "Dead Pond" one mile north of Burford. These little lanterns not only provided a "light onto our feet" but could warm a bare hand when skates were being changed. The little flame of the candle also gave us the impression of all-round warmth that really did not

The other much desired "light dispenser" for boys of the 1920s was the flashlight. This was not really as essential as the candle lantern but it was more "romantic" since it appeared regularly in the "Chums" magazine articles we read. There Great War Officers, policemen, detectives and other storybook he-roes used flashlights or "electric torches" to complete their exciting lives. We tried to be like them and get flashlights of various sizes.

The first was a little two-battery thing that cast a bright circle of light to aid our imagination but could not pick out anything at a distance. Nonetheless, we took pride in possessing one until the day some kid appeared with a two-battery "focussing" light that cast its beam for a distance. This gave its owner great "bragging rights" and we poor sods with the non-focussing lights felt deprived. Owners bragged constantly of how they could identify objects that we could not.

Then the "focussing" lights began to increase in size and power. I got a three-battery light "guaranteed to send a beam for 300 yards". This was quite a "bragger" whose rusting remains still lie among the throw-out trash in my basement. However, my pride did not last very long for my neighbour appeared with a four-battery light "guaranteed for 500 yards". This "ruled the roost" until some kid, whose father had more dollars than sense, appeared with a five-battery light which we kids felt

ended the flashlight bragging which, for a brief time, brightened some of the dark spots in "Dark November".

The next big brightener of Burford life in the early 1900s was the coming of electric power. I have written about this in a previous article. All I will add to this article concerning local light was the great impact it had on local life. As a person who was young when this began I c.an recall that the two main topics of local gossip were

having electric-light installed?" - another "high-faluting" thing.

So now I am back to the things that inspired this article - stained glass. Burford has quite a number of stained glass windows with Holy Trinity Church having stained glass in all its windows, honouring former parishioners. Other churches are also so equipped and at one time the Armoury (now the studio of Marguerite Lar-mand, well-known Canadian artist) had four notable stained glass windows in its drill hall. Several other examples of stained glass can be found in the little "piano windows" that grace some older houses.

"Piano windows" are the little rectangular or round windows set high on the walls of older "living rooms" that were once called "front parlors". They were intended to supply light for people

playing pianos and usually were adorned with "leaded glass" panels of plain or stained glass. They were also a "social gesture" which indicated that the home owner had a piano which was a luxurious purchase in earlier days, and that the "lady of the house" had time during the day to play -it. This, I suppose, was an indication of adult "bragging rights".

So this article has gone a little way through the provision of spiritual and "work-a-day" enlightenment or illumination. Through all this shines the beauty of stained glass which in many cases provided the hope and encouragement for better things to come. Each of us probably has a different version of what that will be, so I will leave it at that. 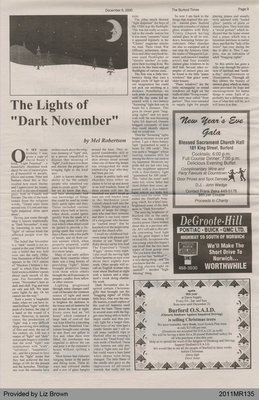