Creator
Robertson, Mel, Author
Media Type
Text
Item Type
Articles
Description
From the 1970s through the 1980s, Mel Robertson wrote many articles for the Burford Advance and Burford Times on the history of Burford Township. This clipping contains the article Let's Go Skating. The article may not have been republished.

NOW THAT WINTER is with us again, many people will turn their minds and bodies to activities involving skates. Little boys and girls have their hockey and ringette leagues. Older girls have ringette and figure skating while older boys rise through their hockey leagues hoping to become Bur-ford Bulldogs. Older people, like me, watch hockey on TV almost every night of the week. All this has inspired me to try my hand at the history of local skating.

To begin, the word "skate" has many meanings. It refers to a ray-type fish with a long tail. It means to "glide in curves over a smooth surface of either ice or wood". A "cheap skate" is amiser and to say "skating on thin ice" means being very cautious in what you do or say. Scottish people have removed the "a" from the word and inserted an "i" to make it a physical performance that fortunately seldom occurs on ice.

The invention of skates and skating seems to have been Scandinavian in origin and in the Netherlands. Geological "digs" in many European countries have turned up skates made of bone thousands of years old. Several fine European and English painters have produced large paintings of people skating on the frozen Thames complete with bands, food stalls, stately gentlemen skating sedately and "sporting types" laughing apishly because a female skater has fallen and shown an inch or two or her ankle-length frilly "drawers".

Skating in Canada appears to have been imported from Northern Europe for there seems to be little evidence of skating in geological "digs". Aboriginal people seem to have had more convenient ways of getting around in winter. I also recall, from my three-year posting to Goose Bay, Labrador and my association with Grenfell Mission people, that aboriginal people along the Labrador coast showed little interest in skating on the vast expanses of ice that were available every winter.

I don't know what sort of skates existed in early Burford times but my grandmother Woodin used to speak of a type that was fastened to a boot by a large screw in the heel and a strap over the toe. "Spring-skates" were in common use at one rime and, as I type this article, an old "spring-skate" sits in front of me. This was a skate that fastened to a boot by means of a lever set mid-skate that operated heel and toe clamps. Apparently the "spring-skate" was quite a good skate and I can recall seeing Burford's figure skater Roh Balkwill cutting "figure eights" with them.

The first so-called children's skate was the "bob-skate" and most children had a pair of these so-called, but really useless, "skates". They fastened to winter boots with straps and each "skate" had four blades about as a kitchen knife. It was impossible to glide on "bob-skates" or to "take strokes". Children just walked about on ice and imagined that they were skating but I doubt if any child learned to skate on "bob-skates".

As children grew older, they graduated into what were called "skates 'n' boots" and, in the sexually^ segregated 1920s, there .were special skates for girls that were smaller in blade and were fitted with high "skating shoes". (It was considered unladylike to call them "boots".) My sister and other local girls had such skating equipment but few boys took any interest in them. Boys' skates were dominated by aplain sturdy skate made by the Starr Company in the Maritimes and were named "Bulldogs". They were not "tube" type skates but just ordinary plain skates with a wide blade that stood up well to the abuse they had to take on local outdoor rinks and ponds.

"Bulldogs" were succeeded by the CCM "Automobile C" skate which had an aluminum plate. These were the most "braggable" skates of the time and owners looked down on the kids who only had "Bulldogs". "Automobile C" skates were not "tube" skates and I cannot understand why kids took so much pride in them.

However, in due course the snooty "Automobile C" was replaced by the CCM "Cyco" tube skate with a much

narrower blade. "Cyco" tube skates had a dull aluminum finish and, in those days of childhood ignorance, kids swore that "Cyco" tubes with their dull finish were faster than the Starr tubes with the shiny finish.

Boys' "hockey shoes" were considerably different from the "hockey boots" of today. They were made of hard, stiff leather with a different coloured toe. Inside was an ankle support that had to be laced up. Then there was the outer set of leather laces and a strap half the way to the toe and, if the kid had weak ankles, metal supports could be added at the heel. Skates were fastened to boots with screws that needed regular Tightening. If this was not done the skates would squeak and one local kid got his nickname from that sound.

Skates and boots were not sold as a unit with skates being sold in hardware stores and boots in general stores, and Dad was left to do the joining of the two. Sharpening was done by the local shoe repair man for 25 cents a pair. If a kid did not have that kind of money a file did the job.

Skating parties were an important social event in the early 1900s and "The Advance" contained many ads letting people know when such a party would take place. Most of these parties were sponsored by the Young People's Unions of local churches but there were a few elaborate privately sponsored skating parties. Most followed the same pattern with an ad telling where the party would take place.

If there was no skating rink in the village, the party was usually held on the Red Mill pond a mile northeast of ^Burford. This was a good place for a party as there were no thin ice spots and there were low banks where skates could be put on. The proprietor of the mill always welcomed skating parties and did not mind if bonfires were lit or even if a "Kelly kerosene flare" was set up. Party organizers also provided transportation from the comer of King and Maple where, for the price of five cents, skaters could be transported by bob-sleigh to the pond.

Food was seldom provided at the pond other than roasted marshmallows but there were several large farm families with big houses who were always happy to accommodate after-party parties. I have a photo of one such party and am amazed at the amount of work and food they involved.

Private skating parties took place now and then with invitations, etc. Most involved well-to-do English families and always included several of the things that Susan Hill mentioned in her excellent little book, "Lanterns Across the Snow".

There was no way of providing music at the skating parties but, since part-singing was so popular at the time, the mention of a song would set off a chorus. Games usually involved "Cracking the Whip".

Skating parties of this kind were before my time but I have heard several stories of how romances were started when "the little red-headed girl" curled up her fingers inside her future husband's mitts or when he helped her put on her skates.

There was lots of hockey in Burford's early days and I have written about it previously. All I will say in this article is to note the frequent riots that took place at games in the militia drill-hall rink that stood on the present site of Cadman's gift shop (Burford Boutique & Gifts). There, on many occasions, mobs of spectators invaded the ice to battle with visiting teams and their supporters - hardly a recommendation for "The Good Old Days".

There was very little "figure skating" in Burford's 1920s. There were many excellent straightforward skaters but only such elderly men as Bob Balkwell did anything more than "cut a figure eight". Younger men preferred more spectacular tricks such as skating full speed at a fence and trying to leap over it. Some succeeded in making this leap and those who failed never talked about it.

In the days before artificial ice, Bur-ford kids skated wherever ice happened to form - on sidewalks, roads, fields or streams. Roads were not sanded and I recall one particularly stupid feat when a number of local boys decided to skate to Brantford when the road became icy. I didn't take part in this expedition but heard later that one of the hazards was the fact that at various places farmers had spread ashes on the road. These spots were not noticeable at night and many of the foolish skaters had nasty falls. However, despite all the mishaps, the round-trip to Brantford was considered by the participants to have succeeded in a "half-arsed" sort of way.

Skating carnivals were another way for skaters to enjoy the winter and, when the rink was on the lawn behind the 1851 building in Burford, they were highly successful. These events were sponsored by local merchants who put up prizes of neckties, scarves, mittens, handkerchiefs and candy. The rink behind the 1851 house had electric lights and boards to confine the activities. According to the local r>*rtprs, there were many costumed skaters and spectators stood frozen-footed in the snow banks behind the boards to enjoy the fun. No music was provided but it would appear that a certain "rhythm" existed.

And so I have come to my last observations about local skating in the 1920s and, in my opinion, it was one of two great accomplishments in the life of most boys of that time. These accomplishments were the first time he "balanced" on a bicycle and the first time he "took strides" on skates. Both of these accomplishments led to great pleasure in summer and in winter. These things may seem trivial in the year 2000, but they were important in a much simpler time before electronic progress made kids much more sophisticated and facilities more available. Now "balancing" on a bicycle and "taking strides" on skates are things taken for granted. They are acquired by kids almost as soon as they can walk and are considered to be of much less importance than "surfing the Net" and other computer skills.

I do not praise or decry either life style but I am bound to note that skating and bicycling brought a child into a better understanding of nature and our outdoor environment than doing one's "homework" by computer. But that, of course, is "everyone to his own tastes".

Finally, all the best to everyone who can skate whenever they want to and a special kind thought to any elderly "skaters" who can still look across the living room and return the smile of "the little red-headed girl" who curled up her fingers inside their mittens at that skating party of long ago. 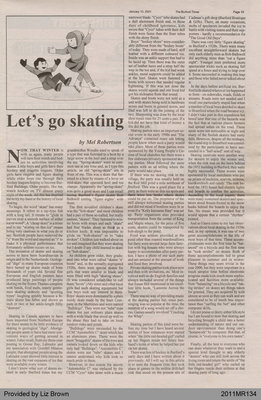