Creator
Robertson, Mel
Media Type
Text
Item Type
Articles
Description
From the 1970s through the 1980s, Mel Robertson wrote many articles for the Burford Advance and Burford Times on the history of Burford Township. This clipping contains the article The Holly Branch. The article may not have been republished.

NOW THAT "grey November" has departed and we are into December, it won't be long before someone says, "Is it cold enough for you?", and you will reply, "Yes, Christmas will be on us before we know it." Then you will know that once again you are on the path that leads to Christmas and that along the way you will note many commercial, traditional and religious symbols and happenings.

During the past 40 years that I have written for local papers, I have always tried to produce an article about local Christmas activities, both religious and non-religious. In all this I seem to have overlooked the various plants and flowers that have become associated with Yuletide. Of these, probably the holly and the ivy are the most notable. However, since holly can be found locally and Christmas ivy cannot, I will concentrate on holly, much of whose historical observances can be found in Barbara Segal's delightful little book, "The Holly and the Ivy", that was published in 1993.

We tend to think that the veneration of holly belongs to what we call the "Christian era". However, it was an object of veneration long before that

era began. Indeed, the Druids, the Greeks and the Romans considered holly to be associated with their observation of the Winter Solstice. Apparently this semi-religious awe emanated form the fact that holly was the only plant that continued to grow berries and remain green all year, whereas other plants only prospered during the warmer parts of the year. This, the ancients felt, was a sign that whatever deities ruled their lives regarded holly as a sacred plant around which a considerable number of religious and non-religious traditions grew, some of which involved fertility and considerable drunken revelry and courtship.

For example, if a young lady was not sure about a suitor, she could decide by floating a holly leaf across a dish of water. If the leaf remained upright, the young man was suitable. If it upset, it meant "get lost" as far as he was concerned. Another holly tradition existed in Oxfordshire where, if a man refused to go out and get some holly, the young lady who asked him was entitled to steal a pair of his underpants and nail them to the door. The reason for this is unknown, but it inspires speculation.

This may have been part of the ancient belief that only men could collect holly and mistletoe and that it had to be done on Dec. 6. Holly in a house was thought to bring good luck, but only until the twelfth night in January when every bit, except a tiny piece to start the fire for the Christmas pudding the next year, had to go out.

Yet another strange use of holly at Christmas existed in the west country of England where it was traditional for young ladies to trim their beds with holly on Christmas Eve. This was done to prevent evil spirits (or anyone else) from trying to get in bed with them. Then, on Dec. 26, it was customary to have what was called "Holming Day" in Wales where groups of boys would battle with groups of girls trying to scratch their arms with holly (Merry Christmas indeed).

Holly had many medicinal "powers" in ancient times such as curing children of certain diseases by application to the skin. Mad dogs could be cured by throwing holly at them, and drinking alcohol from a holly cup would prevent a "hangover".

The use of holly was not confined to the Christmas season for it was used at St. Valentine's Day and by the "Green Man" who, decorated with holly and ivy, danced around the May Pole.

A pleasant and romantic use of holly and mistletoe during the Christmas season was in what was called the "Kissing Bough". This was a wreath made from entwined holly, ivy and mistletoe which was hung up in houses during "the 12 days of Christmas". The tradition was that

ativ woman "Kissing Wreath" was inviting a kiss from any man who wished to do so.

When we think of "kissing wreaths" we tend to think of rather riotous parties where people, inspired by Christmas spirits, tend to kiss any woman, man, child (or dog) that happens to stand under the wreath. However, in earlier times, before kissing had become as common as shaking hands, the "kissing wreath" had a special place. Indeed, Walter de la Mare wrote a touching little poem about it. This describes a young lady who, after all the dancers had left and the last candle was burning low, sat down half-asleep under the "kissing wreath" where "with footsteps" "someone came and kissed me there". She never knew who it was, but apparently it was so gentle it meant a great deal to her and she never forgot it. Such sentimental thoughts may sound silly in 1997, but the little poem does reflect a more gentle time when inter-gender relationships were more formal than they are today, and I will leave it at that.

Another old use of holly at Christmas recalls the Scottish use of a lump of coal on New Year's Eve. For those who are not familiar with the term "First footing", it is a Scottish tradition that, if a dark-haired man brings a lump of coal into a house as the clock strikes 12:00 on New Year's Eve, good luck will follow. In the case of holly, it was traditional in parts of England to leave a sprig of holly on the door step with the hope that a dark-haired man would pick it

up on Christmas Eve and bring it into the house.

Holly has not always been a decoration on Christmas cards, for when these cards were introduced by Henry Cole in 1843 they depicted such things as robins, butterflies, dogs, dancing children, railway locomotives, soldiers and spring flowers. I have a large collection of Victorian Christmas cards (yes, people collect many things, such as beer bottle caps). Holly did not begin to appear on Christmas cards until 1848 and the prize card of my collection is one issued at that time which shows some holly on the front and a bunch of spring flowers and fancy vases on the back. It may be interesting to note that almost all the penny-post Christmas cards of Victorian times included holly whereas the more expensive cards that were sent in envelopes stuck to the roses, violets and Grecian urns.

The reason that so many spring and summer flowers existed on early Christmas cards was due to the popularity of "The language of flowers" where each flower had a hidden meaning. For example, a rose indicated love, a wild geranium meant steadfast purity, a pansy meant "You occupy my thoughts". Well down on the list was ivy that signified friendship and holly that indicated "Foresight" - hardly a romantic thought.

The association of holly with gift-giving goes back to pre-Christian imes when Romans exchanged gifts on their Kalens or New Year's festival on Jan. 1. A sprig of holly was always enclosed with such gifts to Holly can be found in over 400 varieties on all continents but Antarctica. It is particularly popular in Brazil where it is ground to produce a tea-like substance for a drink called mate. In Canada we have several types of holly, two of which grow in my front and back yards. These plants do not have berries and are not particularly "Christmassey". However, there are other holly-like bushes in the Burford area. I refer to some bushes that grow at the edge of the swamp two miles north of Burford on Maple Avenue. These shrubs produce a large hard red berry in winter and we used to cut branches for Christmas decorations.

And so, as we "deck the halls with boughs of holly" and anticipate "the season to be jolly", let us appreciate the colour of holly at a time when other colours of Nature are lacking, but let us never forget that the true celebration of Christmas is to honour the birth of the Christ Child.

In writing this article I realize that there are many other uses and legends involving holly, but it was never my intention to make this Christmas article an academic yawner. In addition, I have confined most of my observations to the non-religious aspects of Christmas. As a Christian I am well aware of the real reason for Christmas celebrations, but I will leave the religious aspects of the season to the well qualified theologians whose interesting columns appear regularly in our paper. 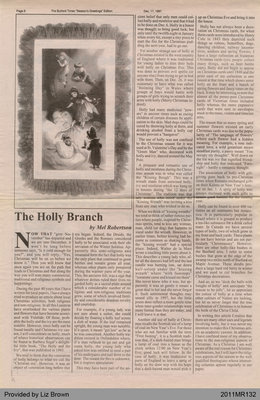