Creator
Robertson, Mel, Author
Media Type
Text
Item Type
Articles
Description
From the 1970s through the 1980s, Mel Robertson wrote many articles for the Burford Advance and Burford Times on the history of Burford Township. This clipping contains the article Fictional Families. It describes babysitting services in Burford with a historical perspective. The article may not have been republished.

BACK IN THE pre-electronic days before childhood became computerized, people had to use their own imagination to create play

Back then the word "bite" was spelled with an "i" instead of a "y", a "mouse" was not an essential part of a computer but rather a Disney or Burgess character, and an "apple" was meant to be eaten and not to "surf the "net". Some people call those times "the good old days", but I prefer the expression "the different old days". I leave it to each individual to decide if times were "good" or "bad". However, before we come to hasty conclusions either way, let us not forget that several important things shaped many of the activities of "the different old days".

One of these was the lack of convenience food and convenience equipment that made a young mother too busy to devote much time to the entertainment of her children. Another was the complete lack of sports and entertainment organizations and facilities, and yet another was the fact that people had not been indoctrinated with the idea that any older person who offered to help entertain children was a pervert out to sexually abuse them. Thus, when young mothers were trying to wash clothes in a tub or cook a meal on a balky wood-burning stove, they let grandparents or unmarried female friends provide the entertainment. This assistance was welcomed and, as a child of those times, I never heard of anyone who tried "to get funny" (yes, that was the expression) with any child who had been entrusted to their care.

Many of these unpaid "babysitters" were very adept at organizing games or making up imaginary situations in which a child could feel happy. One

of these rare abilities was the creation of "imaginary families" in which a child could feel that they were an active member. Such "fictional families" existed in many real families and, over the vears, I have heard

many people mention them with humour. Personally I can recall three such "families".

My first experience with a "fictional family" was with my grandfather Charlie Woodin who was a most unlikely creator of fantasy. C.N. Woodin was a building contractor and house-mover by trade who moved houses and whole streets all over Western Ontario. In addition, he constructed several large factories complete with their very tall brick chimneys. He was known as a bit of a "character" who on impulse would buy friends gold watches. He was also adept at doing practical things that had to be done but lacked either public will or money to do so. For example, when the village could not afford to build a sidewalk along William Street from King to Dufferin and people were having trouble getting to the Methodist Church at the corner of William and Dufferin, Charlie hitched up one of his horses and drove to London where he rented a phonograph. Such machines were rare at the time and the concert he arranged brought in enough money to make the sidewalk. On another occasion when the construction of the local Post Office was being held up by a few "tree-huggers" who would not let an old dead tree on the site be cut down, Charlie organized a midnight crew which cut the tree and took it away. On yet another occasion when he heard that local militia men were being fed stringy beef and boiled potatoes at summer camp, he signed on as a Corporal cook who illegally sold the army rations and bought chickens

and steaks for the local men, most of whom worked for him when they weren't at summer camp.

Charlie Woodin made considerable money during his life, but his "easy come, easy go" attitude did not leave much to those who followed him. Consequently, I do not remember grandfather Woodin for any financial inheritance, but rather I remember him for the "fictional family" he created for my sister Emilie and me. This family had no surname but was known as "Ma & Pa, Fatty & Skinny, Sis and the Baby". I realize that the terms "Fatty" and "Skinny" are not "politically correct", but since I have had both terms applied to me during my life, I will not use some "politically correct" term such as "body mass challenged" to describe these fictional characters.

The "fictional family" lived in our home and, whenever Grampy Woodin came, they were ready for action. This was always set off by our grandfather asking how they had been doing and we would suggest an answer. "Tell us a story about Fatty & Skinny and the steam engine" or "the electric doll carriage", etc., and without delay such a story would be told in such a way that we would both feel that we were involved. These stories never repeated themselves and always had a happy ending.

After my grandfather's death, my mother created a new "fictional family" called "the Malleys". I don't know why this name was chosen, but I think it had something to do with marshmallows. All of this new "fictional family" were "body mass challenged" in one way or another and all sun to those of Babar, that famous character of many childhood books. This "fictional family" was unlike that of Grandfather Woodin's for its adventures dealt more with dogs and cats than with mechanical things. The "Malley" family existed in our house until we went to school and became involved with such things as "The Little Red Hen". However, the "Malleys" still existed in the background and might be referred to when some ridiculous situation needed a good laugh.

The next "fictional family" in my story was the "Keraans" which my daughter Elizabeth created. Where the name came from neither Elizabeth nor I can explain, but their activities were discussed daily for a number of years with great amusement on everyone's part. I cannot remember any specific details about this "fictional family" for their activities varied rapidly from day to day. Here again the name of the "Kernans" comes up when something really silly hits the front page.

The "Keraans" were replaced by a family with an unspellable name who got their creation after a visit to the famous Tivoli Gardens in Denmark which, as many people know, is a magical place where every type of children's amusement is combined without trying to turn every child into Mickey Mouse. This "fictional family" existed as long as we lived in Europe but did not seem to survive our return to Canada.

"Fictional families" have been created for purposes other than the amusement of children. In some

cases they have been created in order to provide an ideal toward which children should strive. In such cases children would be urged to emulate the academic or athletic ability of someone in the real family's "fictional family". Even worse was the use of "fictional families" for the benefit of a parent who did not want to get old. A couple of these cases are fairly well known. One is the case of the writer, A.A. Milne, who created his "Christopher Robin" and "Winnie the Pooh" fantasies in order to retain a feeling of youth. Unfortunately, his son, the late Christopher Robin Milne, was saddled with this "fictional family" all his life and had to endure constant jibes and ridicule as he grew older (reference - "The Enchanted Places" by C.R. Milne). Another similar misplaced fastasy could be J.M. Barrie's famous "Peter Pan" which praised the ever-youthful "Lost Boys" whose sub-teen leader, Peter, not only fought pirates, but also showed considerable sexual interest in a female fairy named Wendy.

"Fictional families" still exact considerable influence on people's lives. The best of these, to my mind, is the family Lynn Johnston portrays in her cartoon, "For Better For Worse", that appears daily, weekly and in TV film. This family includes a dentist father, a mother who works part-time in a library, an older son, a teenage daughter and a much younger girl. For some time the family included an old and whimsical dog. Finally, in order to bring a younger dog into the cartoon family, Lynn had the old dog die when it rescued the youngest child from a rushing river. This created great sorrow and indignation

among the many admirers of the cartoon and, in a letter to me, Lynn expressed her amazement at the immense number of letters she had received praising or condemning her for what she had done. She took this as a compliment for the way she had succeeded in making her "fictional family" live as a real family in the minds of so many people.

A similar outpouring of concern took place when Walt Kelly decided to terminate his very popular "Pogo" cartoon. This, as many will recall, featured a "fictional family" of little animals led by Pogo, a possum. It was a very clever cartoon in which the animals put sophisticated humour into many national concerns and foibles. In his last "Pogo" cartoon strip, Kelly portrayed his little "fictional family" of animals waving good-bye as they scampered back to their home in the Okeyfenokey swamp - a simple gesture that apparently touched the hearts of many practical people.

Do "fictional families" still exist in the hearts and minds of ordinary families? I doubt it, for we now live in an age where "electronic progress" has made it more "cool" to be "lean and mean" than to be kind. Social emphasis has changed to the point where "computer training" is more important than "toilet training" and where litigation has replaced simple inter-person discussion. 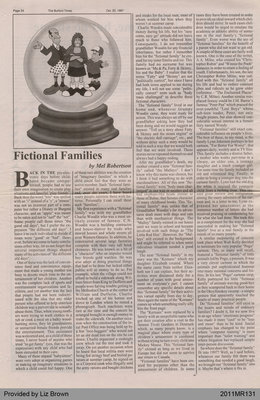