Creator
Robertson, Mel, Author
Media Type
Text
Item Type
Articles
Description
From the 1970s through the 1980s, Mel Robertson wrote many articles for the Burford Advance and Burford Times on the history of Burford Township. This clipping contains the article July - the Month of Dates. It describes the events that happened in Burford in the month of July. The article may not have been republished.

JULY - the month of dates

THE MONTH OF JULY

contains many remembrance dates - some good and some bad. It had its start as the fifth montn of the Roman calendar and was called Quintilius. However, when the calendar was adjusted it became the seventh month and was named after Julius Caesar, the famous Roman general and politician whose chief remembrance in 1997 is in Caesar salads and Caesar Palace casinos.

The July days of remembrance include July 1st which is our Canada Day or Dominion Day or Confederation Day or whatever day is "politically correct". It is also a day of bad remembrance for World War I; The Battle of the Somme began on July 1st, 1916. In this conflict, due to the stupidity of Allied generals, over 30,000 men were killed between 6:00 a.m. and noon in an area about the size of Burford. July 4 is the American Independence Day. July 12 is Orangeman's Day. July 14 is a big holiday in France as Bastille Day when the mob destroyed the great prison in 1789 and the French Revolution began. There are many other July remembrance days but I am only interested in those that involved our area. The most important would seem to have been July 12.

It is not known who was the instigator of the Burford Orange Lodge or why it was founded. There was no shortage of lodges and other organizations in the village and there was no large Irish population. Moreover, there was only one Roman Catholic family - that of our jolly innkeeper Mr. Dunn. However, a lodge was constructed on the site of Home Hardware that was described in The Bur-ford Times as "comfortably equipped" with a good organ. Later it became the home of "The Young Britons" lodge and is now a residence at the corner of Maple Ave. North and Dufferin Street. The lodge did not last for long but, during its existence, the Burford Brass Band took part in every July 12 parade including parades in Hamilton and Port Dover. When out-of-town parades were not available the local musicians had their own little parade which, for lack of contestants, was quite peaceful.

During my time I have had experience with less peaceful July 2 parades. Horn 1936 to 1939 I worked every summer with the Ontario Department of Education in Toronto doing the statistical work for the Departmental exams. There was a staff of about 300 university students involved in this work that ran from May to September each year. Most of it was peaceful but July 12 was a problem for Orangemen had the idea that the Ontario Government hired only Roman Catholics and they used July 12 to demonstrate their opposition. This was done by marching drum-beating bands around the Ontario Parliament buildings. Hundreds were involved and the noise was deafening. We were all called together on July 11 and warned not to cut through the parade under any circumstances as we would probably be assaulted. Thus, those of our staff who were working in the University of Toronto buildings had to put off any trips to the main office in the Parliament Buildings until the parade was over.

Of a much more peaceful nature was the fact that, from quite early times. Bur-ford township was a main centre for the growth and export of strawberries. One illustration of this is a Burford Times report of July 1,1886 in which the North-field correspondent reported that D.W. Lee had picked 5,400 boxes of strawberries in one day and would have picked more if he had been able to get more pickers. The shortage of pickers at one cent a box was due to the many strawberry farms in operation. Another sign of strawberry production was frequent reports that the Burford RR station waiting room, freight shed and platform were completely jammed with crates of strawberries awaiting transportation. In the 1920s Burford village had several large strawberry farms including Jack Smith's (site of Blessed Sacrament church) and ontfe operated by Walter Weaver behind 87 King St. East. There are, of course, several large strawberry farms still in operation but they do not receive the publicity the old "Times" and "Advance" gave such enterprises in earlier times. It is not known as to what use was made of so many exported strawberries as lack of refrigerator cars would seem to have precluded long journeys.

One local use of strawberries was in the many strawberry socials that took place every weekday afternoon and evening in earlier Julys. The local paper was packed with ads of coming festivals and reports of those that had been held. At most evening festivals and garden parties the Burford Brass band or the Scotland band was in attendance. Their presence was taken for granted but, when we consider the inconveniences involved, we have to admire the bandsmen's ingenuity and devotion to duty that was involved. For example, let us take Fred Day, a longtime Burford bandsman who had a farm northwest of Burford. In order to join the band for its early-evening engagements or out-of-town trips, Fred had to work extremely hard to see that all farm duties were met before he got into his band uniform and ran to meet the jitney wagon that was taking the band to their appointed place. The same thing would have had to be done by other Burford band members as well as those of the Scotland and Northfield bands. Out-of-town trips could involve the band in train changes and wearying waits, but reports from Port Dover, Norwich, etc. always gave high praise to the way the Burford Band "issued onto" (that was the phrase used) the picnic grounds, fair grounds or any other place they led an excursion or a lodge. Expeditions away from home plus two or three garden party engagements every week in July must have left the band in good financial shape and the bandsmen too pooped to play. Indeed, the local editor liked to put in newspaper items suggesting that so many bandsmen had retired behind the lilac bushes for a nip of the "old hoop iron" that there were not enough to play the National Anthem at the end of the garden party. This was really an unfair dig as the editor was also the bandmaster.

July 1st 1910 brought a major warning to all users of milk in the Burford area. This was that milk from excited cows caused headaches, palpitations, sluggishness of thought and apprehension. People were warned to buy milk only from farmers who kept their cows "calm, unexcited and in good humour" and not chased by dogs. I don't know how milk-users went about collecting information about contented cows but the warning took up a lot of newspaper space. This warning was followed by another saying that the failure of so many people to cut the weeds in front of their properties was causing a dust problem which George Ausleybrook tried to solve by dumping oil on the road in front of his house. This created a mess for pedestrians but resulted in the annual oil-coating of Bur-ford streets that continued into the 1930s.

July 1910 also saw the beginning of the hot controversy over the formation of a Boy Scout troop with the Anglicans supporting it strongly and Methodists opposing it. The paper claimed that every boy in the area wanted to be a Scout with sword drill, marching, sham battles and other warlike activities. What a contrast this is to the great Scout Jamboree that was held last month in Northern Ontario. However, after considerable inter-church bickering, the Boy Scout troop was formed without the sword drill but still with considerable military emphasis. Of a less controversial nature was the installation of electric lights on the local bowling green. This made local headlines that lasted for years but would not be given a second word today.

However another event of July 1910 drew much controversy. This was the predicted arrival of Halley's Comet. This caused a great deal of apprehension since there were no hourly newscasts and little local astronomical knowledge. As a result, there was widespread speculation and concern as to what the comet night bring. This included hurricanes, epidemics, invasions, etc. Near-panic raged in some quarters but in Burford a more practical attitude prevailed with local businessmen hoping to profit from the comet. One such entrepreneur was C.F. Saunders, the local insurance man, who put ads in the "Advance" urging people to buy insurance that would cover anything the comet could bring. Another man was the local agent for lighting rods who inserted lists of people who had bought lightning rods from him in every issue of the paper. Others without business in mind planned "comet parties" which were based on the erroneous belief that the comet would appear every evening like a giant shooting star in the western skies and would rush over the area in a very spectacular display. Most "cometparties" were organized by young people. The idea was the groups would assemble at open places at the creek, roast marshmallows and then spread out blankets on which they would lie to see the comet rush overhead. It is assumed, of course, that since there was such segregation of the sexes in those days, the girls lay on one blanket and the boys on another and that inter-blanket transactions were strictly prohibited. No one, to my knowledge, left descriptions of these "comet parties" other than notices in the paper saying "I saw the comet' without reference to anything else that was experienced. Actually, nothing astronomic happened. Yet another July experience of former years could almost be described as "Christmas in July". This applied to local large families where, every summer, aunts and uncles came home for

always came bearing gifts for nieces and nephews - a baseball, a new doll, picture books, a new "shirt-waist", etc. These summer guests always insisted on special outings - picnics at the creek, visits to Mohawk Park, an evening of icecream at George Armstrong's Ice-cream Parlour (now the back part of Greenwoods) and other events that parents were too busy to undertake. All this plus the arrivals and departures at the Burford Railroad "depot" took up considerable parts of very hot Julys.

Finally, it is not possible to write about earlier Julys without mentioning the gigantic railway excursions that took place in which several thousands of people from this area were transported to Grimsby Beach and Niagara Falls. The Bur-ford Band usually accompanied these expeditions and paraded the excursionists to the beach or the Falls. I have mentioned these excursions before so will not repeat myself other than to say that they demonstrated a close community spirit that does not seem to be present today when an individual's mind is so filled with the vast array of electronic, mechanical and organizational accomplishments that a trip to Niagara Falls has become meaningless.

And so, Julys came and went as the best part of the summer holidays when it was still not too hot and not too cool and there was lots to do. August was not the same sort of summer for it was usually dry, dusty and with a heat that wore you down. "Dog Days", which set in about the first of August, discouraged many out-door activities for kids and even "Fido Bowerman", our big Scotch collie friend, had to be encouraged to accompany us on swimming hikes to the creek.

Here this chapter must end on a sad personal note with the death of my dear wife of 56 years after a long period of suffering. She always encouraged me to write these articles and I hope to continue them in her memory. 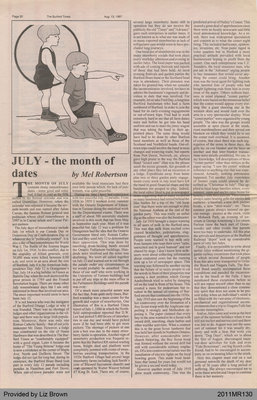