Creator
Robertson, Mel, Author
Media Type
Text
Item Type
Articles
Description
From the 1970s through the 1980s, Mel Robertson wrote many articles for the Burford Advance and Burford Times on the history of Burford Township. This clipping contains the article Anyone for Tennis? It describes the history of tennis games played in Burford. The article may not have been republished.

ECENT TV COVERAGE of the

Grand Slam tennis tournament in Toronto brings to mind the fact that tennis, in one form or another,

as been played in Burford for over 120 years. Not, of course, Grand Slam tennis but tennis as a part of Burford's social life for many years.

When lawn tennis was developed in 1876, Burford was quick to take it up and, by the late 1880s, Andrew Miller had established a grass "court" on his front lawn (now Sun-ridge Lodge, 86 King St. East) and, by the early 1900s, over 10 private courts had been established at various homes in the village. Some of these were located as follows -158 King St. West (Bill Sprawl's property), 154 King St. West (my place), F.A. Miller home (now Muriel Miller, Maple Ave. North), the Methodist parsonage (now 46 Maple Ave. South) and Holy Trinity Rectory (now 76 King St. East). There were also tennis courts at several other Burford homes with large lawns as well as some at rural properties.

These were all grass courts of varying smoothness depending on proper rolling and grass cutting. Lines were marked by hand or with a little two-wheeled machine which, by means of a revolving belt, spread liquid lime. There were no back-stop nets to stop wild shots and I have been told that often romantic episodes were enjoyed when mixed tennis couples searched in lilac bushes for lost balls.

Owning a private lawn tennis court in 1890s' Burford could give rise to a certain amount of local snobbery and I have been told that owners of some private courts (not mentioned above) did not hesitate to "shoo away" any person they considered to be socially inferior if they stopped to watch a game.

The introduction of tennis to Burford added a new feature to outdoor summer entertainment for, before it became popular, most summer afternoon events consisted of rather formal tea-parties with music by the local talent or by Prof Carpenter's musical trainees. However, tennis loosened up the formality of these occasions and brought young ladies to them both for entertainment but also marital possibilities, for mothers of marriageable girls noted that many of the the young clergymen, bankers, doctors, etc. whose working hours ended at 3:00 p.m. were unmarried and might be interested in introductions and turning "mixed doubles" into a more permanent situation.

Burford's first tennis club was the Alpha Tennis Club that Andrew Miller formed in 1909 at his home at 86 King st. East (now Sunridge Retirement Lodge) where he maintained two good courts. This club was widely patronized and the minutes of its 1909 meeting include a Managing committee, a Grounds Committee and a Social Committee. Men had become members in increasing numbers with merchants whose day lasted until 6:00 p.m. joining with the hope of getting in a match before it got dark. Committees also included quite elderly people who obviously would not be playing tennis.

This club ran several tournaments and I have a picture of one such affair with formally dressed great-grandmotherly women sitting around little folding wooden tables (I have one) having tea while competitors loll about in the background. Tennis attire is quite formal with women wearing ankle-length white or blue skirts, "middy" blouses with "sailor collars" and long flowing ties. Men sweated in white duck trousers, long-sleeved white shirts and white or brown caps. Off court men wore stiff collars, ties and grey or dark trousers. However, one gentleman is defying formality by lying on the grass and feeding a dog whose blurred running figure can be seen in the photo.

In 1910 the Alpha Club moved to the Methodist Parsonage court at 46 Maple Ave. South where it lasted off and on until the early 1920s.

Tennis at the early courts tended to be of the "pitty-pat" variety with no slams or volleys and I can recall, as a kid in the 1920s, attending a tennis tea at the Methodist parsonage where a newly arrived banker introduced "Slam" tennis. This caused great indignation and he was not invited again.

Another cause of local indignation was the fact that, before Wednesday afternoon closing was introduced in 1910, businessmen could not take time off to play tennis and male participation was restricted to clergymen, bankers and doctors whose working day ended at 3 o'clock. As a result, the editor of "The Advance" took great pleasure in printing insulting comments about them. These annoyed many people who noted that

the editor frequently put a "Gone fishing" sign in his office window whenever he "knocked off early" to attend a social function with pals at the creek.

Tennis racquets of Alpha Club days were not the light, wide, synthetic things we have today. They were made from solid wood with "cat-gut" strings and a leather handle. Lamination had not come into use and, unless a person kept their racquet in a "press", it was apt to warp and cause the "gut" to become loose or to break. Broken "gut" was a serious problem as re-stringing was a time-consuming and expensive job that could only be done in Brantford. However, if racquets became too warped for use, "sporting" families would hang them up in their hall with a ribbon around the handle to show that tennis had once set them apart from "non-sporting" people.

In the early 1930s Burford tennis changed from the "pitty-pat" of "lawn tennis" to the "slam-bang" of hard-court tennis. This was brought about by the Royal Bank transferring Bob Simpson to be manager of their local branch and the Anglican church sending the Rev. Reg Lane to be Rector of Holy Trinity church. Both of these men were enthusiastic and skilled hard-court tennis players and they set about creating the facilities. This was fairly easy as the unused lawn bowling green was right behind Bob Simpson's bank (it is now a parking lot) and the Anglican Rectory was at the end of King St. East.

Soon, with their own efforts and pocket-books, these two gentlemen had established an excellent hard court. Teenagers were encouraged to play and a good group of players was formed. Out-of-town matches were arranged with the Royal Bank clubs in Scotland and Norwich as well as with church clubs in Brantford and community clubs in Paris and Woodstock. We were able to hold our own in these matches due to the strong play of our ladies and the experience of Mr. Simpson and Reg Lane. Actually, I can only recall one disaster when we played the strong Woodstock club under lights. This was our first experience with artificial lighting and I don't think we won any games.

Our club grew to a considerable size and I recall many happy times. Unfortunately, the club did not survive after Bob Simpson and Reg Lane left Burford. I don't know how many members of the club continued to play the game, but for a few years I continued to play my so-so game at clubs in the Maritimes.

Tennis has been an "off-and-on" sport in Burford for well over 100 years and, although there are good courts near our arena, I doubt if anyone asked the old question "Anyone for tennis?" they would be knocked down in the rush. However, worldwide tennis has advanced tremendously in the past few years and anyone watching the recent TV coverage of the Grand Slam tennis in Toronto could not help being filled with admiration and amazement at the power, accuracy and skill shown by some teenaged champions.

There is, of course, the other side of the game which I did not know existed. A few weeks ago I received a letter from one of Shirley's first school friends who is married to a tennis player who is over 80. This man apparently still finds enough joy and finance in competing in "over 80s" tennis tournaments in many parts of the world and they are constantly on the move. To this, all I can say is "Wow". 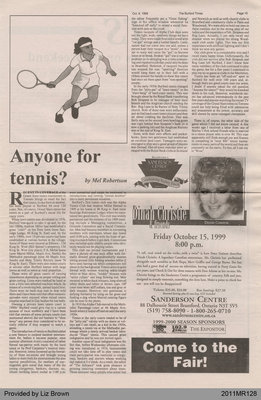